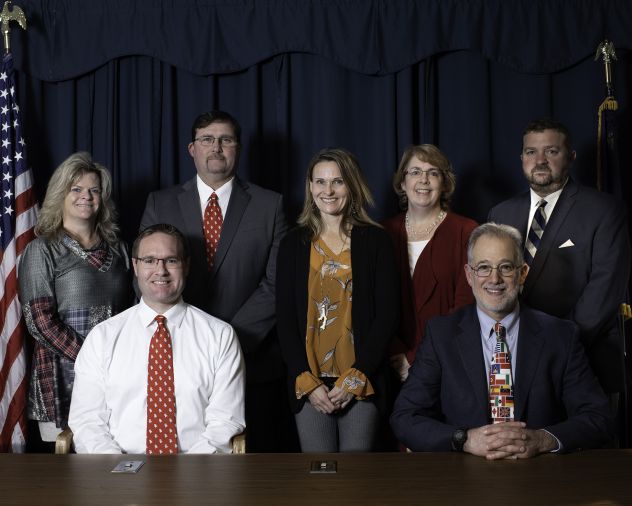 School Board meets the second Monday of the Month at 7:00 P.M. at the High School Lecture Hall (Wednesday if Monday is a holiday)  The seven members are voted into service by the qualified electors of the city for a three year term.

The department of education shall be administered by a board of education called the "school board," which shall consist of 7 members, one from each voting district, 2 members to be elected at large, elected in a city-wide election. Members must be qualified electors of the city and residents of the districts from which they are elected and remain inhabitants of the city during their term of office. The term of office, except as provided herein, shall be for 3 years and until their successors are duly elected and qualified. In the regular municipal election to be held in December, 1974, the member from District 2 shall be elected to a five year term and the member from District 3 shall be elected to a four year term. At the expiration of the said five year term and four year term the representatives from District 2 and District 3 shall thereafter be elected to regular three year terms.

The school board shall meet for organization during the first week in December in each year, and after being duly sworn to the faithful discharge of duties by a justice of the peace or by the city clerk, shall elect a chairman from its membership for the ensuing year. Four members shall constitute a quorum for the transaction of business.

The school board shall hold regular monthly meetings, and such special meetings after reasonable notice to all members as may be called by the chairman. All such meetings of said board shall be open to the public.

Whenever a vacancy in the school board occurs the vacancy may be filled by a majority vote of all the members of the city council and the member so elected shall serve until the next regular municipal election when a new member shall be elected to fill the vacancy for the unexpired term, if any.

The school board shall have all the powers conferred and shall perform all the duties imposed by law upon superintending school committees in regard to the care and management of the public schools of the city, except as otherwise provided in this charter. The school board shall, when requested by the city manager, furnish budget estimates in detail of the several sums required during the ensuing budget year for the support of the public schools and shall make such financial and activity reports in writing whenever and in such form to the city manager as the manager may require.

From the effective date of the budget the several amounts stated therein as proposed expenditures by the Department of Education and as approved expenditures by the City Council shall be and become appropriated to the specified categories as stated and shall not be used for other objects and purposes except as permitted in this section.  The school superintendent may at any time transfer any unencumbered appropriation balance or portion thereof within but not between the categories of salaries, contracted services, supplies and capital outlay.  At the request of the school superintendent, the school board may by resolution transfer any unencumbered appropriation balance or portion thereof from one aforementioned category to another.

The annual compensation of school board members shall be one thousand dollars ($1,000.00). The effective date of this amendment shall be January 1, 1987.