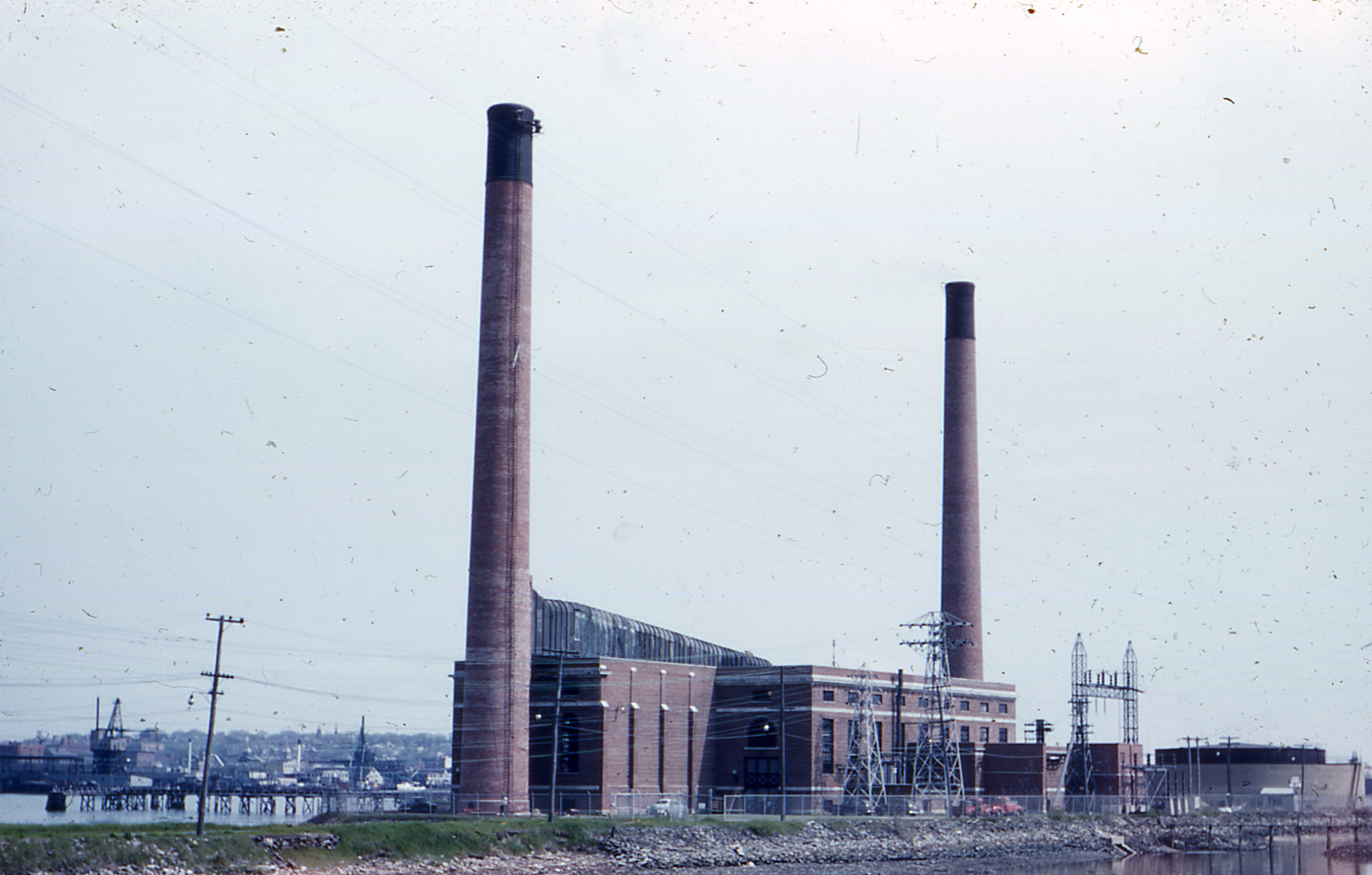 With the passage of time, almost everything around us changes.  Just below the Casco Bay Bridge, if you have even noticed, are the remnants of the Cape Power Station which started its life generating power that ran the trolleys.  Not far from the station is “the old car barn” that once housed and repaired the trolleys.  A portion of the building closest to Ocean Street sits relatively unchanged from that era, however much of the adjoining building now houses residential condominiums on the upper level and is home to the Snow Squall Restaurant at the back.

Traveling back to the 1800s, you would have seen ships in various stages of construction perched along the shoreline from Ferry Village to Turners Island along what was then the Cape Elizabeth shoreline.  Nathaniel Blanchard, one of Portland’s leading ship chandlers, and Thomas Knight, a master shipbuilder of Portland, built a sizable shipyard in the mid-1800s in this neighborhood that would later become known as Knightville. Thomas Knight Park is also named for the famed shipbuilder.  Thomas Knight’s father joined forces with him in the 1860s and the Knights continued their shipbuilding activities there until 1868 when the business closed.

Just north of the site of the Blanchard/Knight shipyard, in 1869, the Portland Dry Dock and Warehouse Company completed what was called the second largest dry dock on the Atlantic coast.  Three sides of the earthen dry dock are still visible from the high vantage point of the bridge.  The business was never a financial success, however, and in 1921 Cumberland County Power and Light Company built a steam-powered generation station to power the trolleys and later as a backup for electricity generation during times of high demand.

Travelers could not have crossed the Million Dollar Bridge without noticing the two large smoke stacks that stood 220 feet tall at each end of the generation plant.  The “chimneys”, as they were called on the demolition permit, disappeared from view in 1979 and the following year, the brick building was torn down.  In my early days of boating, I recall the stacks were noted on the navigation chart for Casco Bay as they could easily be seen from miles away as an aid to mariners.

My thanks go out to Clyde Hamlin, Cathy Counts and Kathy DiPhilippo for research assistance.

Sometimes a gap exists between what you know or have deduced from available facts and what you can prove.  Such is the case with my story about moving day at Broadview Park and Peary Village after World War II.  The villages contained hundreds of buildings that housed thousands of workers and their families which all sprung from the need to build transport ships for the war effort.  The trail upon which I was building evidence grew cold a number of years ago and I have yet to connect the dots.  Perhaps with your help, we can find the proof necessary to confirm this piece of history.

Many residents moved away in search of work after the South Portland shipyards closed and left behind many vacant and what must have been lonely buildings.  Moving day took on a whole new meaning when enterprising locals put wheels under whole buildings and moved many of them to new locations where they were recycled into homes and perhaps beach houses or businesses.

According to Stan Cox, one such building that started its life in Broadview Park now sits on the corner at Highland Avenue and Dresser Road.  The “L” shaped building appears to have been an assemblage of two sections of buildings moved there after the war.

Recycling of buildings from our war time past was not limited to those temporary neighborhoods in South Portland.  I spoke with Belle Graney, a longtime resident here who described for me the transformation her beach house underwent.  Now located on the corner of Vesper and Greenwood at Higgins Beach, the building’s past can be traced to Fort Williams where it served as a garage. She recalls that after her father moved the building to Higgins Beach, the windows all had bars and originally there were two barn-style sliding entry doors long since replaced with the current French doors.

Thinking I had an eye for finding these elusive buildings, I first suspected the Country Kitchen in Scarborough was one of them.  Research with the help of Rodney Laughton from the Scarborough Historical Society uncovered that the Country Kitchen was built from scratch in the 1950s by a prior owner.  Rodney did point me towards the end of Pearl Street extension at Higgins Beach where he says in fact is one of our own former Broadview Park buildings although due to extensive alterations since then, you would not recognize it as such.

The pinnacle of this story, though, is a neighborhood in Gorham off Route 25 just beyond the Ossipee Trail Fire Department.  A tour of Daniel Street and Jonathan Road will give you a Technicolor version of driving through Broadview Park or Perry Village those many long years ago.  Not unlike when the Wizard of OZ transforms from black and white to color, a drive by will reveal how such bland temporary buildings from war time neighborhoods were transformed into decent permanent homes. 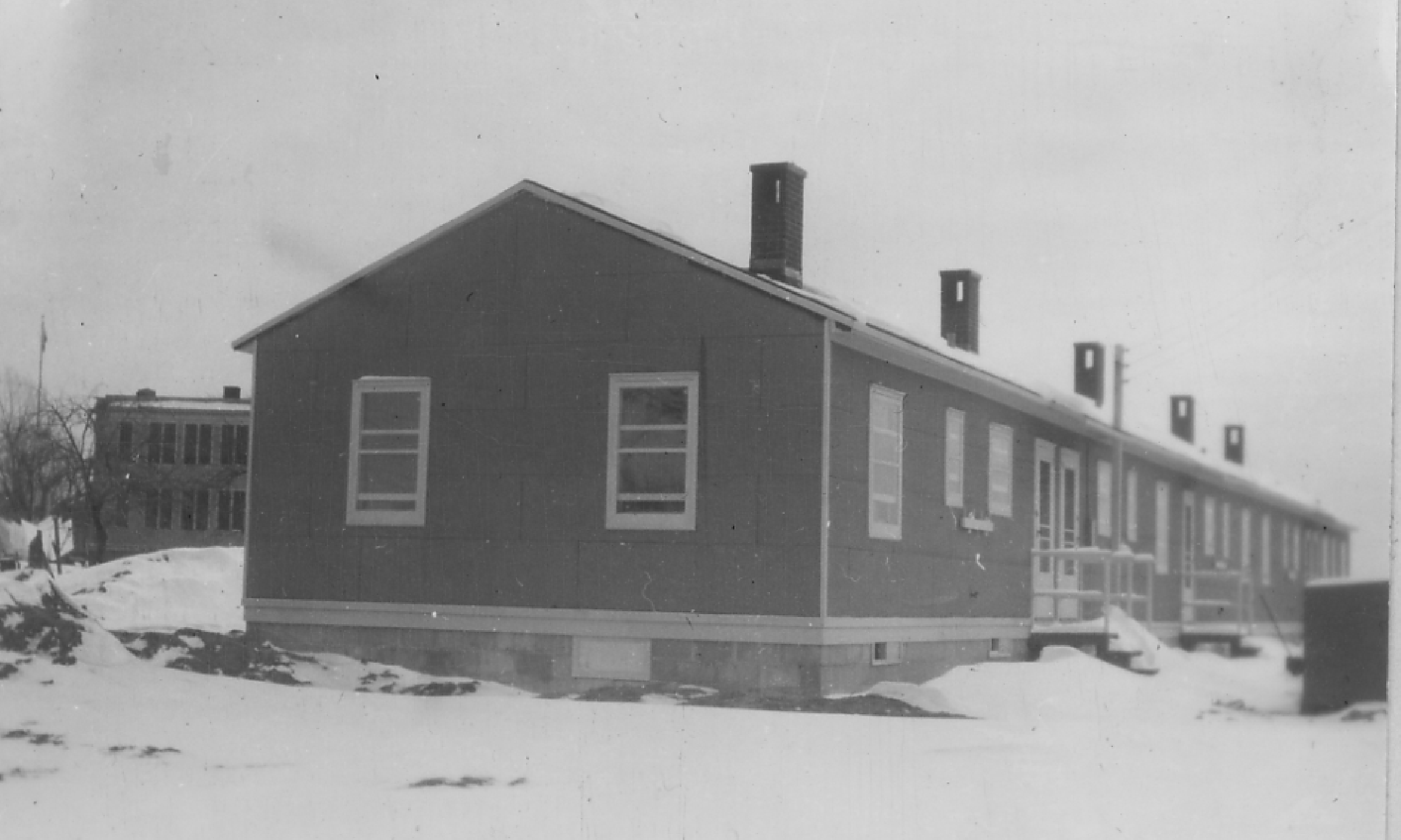 As we compare the two photographs I present in evidence, the size, shape and location of the replacement windows are the sign to me that says this is a candidate for any one of the buildings moved away after the war.

Final Days for the Willard Exhibit

If you’ve been meaning to come by the South Portland Historical Society’s museum to see the 2014 Willard exhibit, you’ll want to do so soon.  The Society’s Cushing’s Point Museum is open every day from May 1 through the end of October. Next week will be our final week of weekday openings for the 2014 season; starting November 1st, the museum will only be open on weekends. Once the museum closes for the season on December 21, the Willard exhibit will be removed and replaced by an exhibit on Meeting House Hill for the 2015 season.

We have enjoyed talking about the Willard neighborhood this season. Visitors have seen a sampling of early bathing suits in the exhibit that were worn by residents at Willard Beach, along with old photographs and other items related to the neighborhood. It has been interesting to learn about the role that the trolleys played in bringing tourists to stay in a number of hotels and boarding houses that were once located in the area.  We would like to thank the business sponsors of the Willard exhibit: Flynn & Company Real Estate; Noyes Hall & Allen Insurance; O’Hare Associates, CTRS; and Town & Country Federal Credit Union. We also thank our gold sponsor, Scratch Baking Co., for supporting us this year in celebration of the Willard focus. 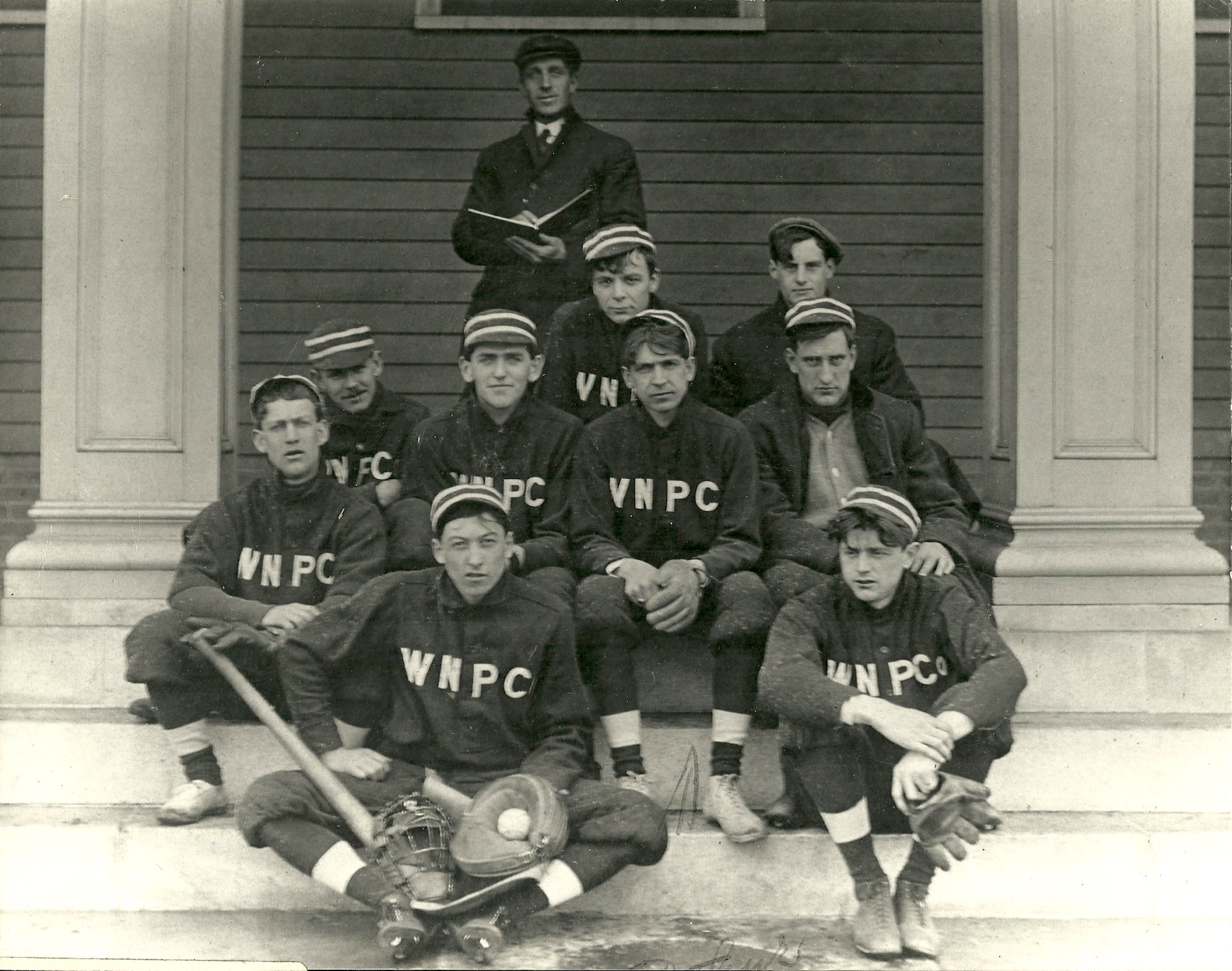 Our cataloguer, Lynn Young, came upon the accompanying photograph last weekend in our archives.  This wonderful photo of an old baseball team was taken on the steps of the old Willard School that was located on Meeting House Hill, on the triangular piece of land between Pillsbury and Davis Streets. The Willard School served children of the Willard and Meeting House Hill neighborhoods. We wish we knew more about the baseball team; if anyone out there has more information to share, we would love to hear from you!

In preparation for the upcoming Meeting House Hill exhibit, the historical society will hold one of its popular Evening Chat programs on Thursday, November 20th, at 6:30pm at South Portland City Hall. The oral history program will cover the history of the Meeting House Hill area. Current and former residents are welcome and encouraged to attend so that we may record their memories of growing up, living and working in this neighborhood that spans from Red’s Dairy Freeze, up Cottage Road and toward the city line at Cape Elizabeth. We hope you’ll mark your calendar for this important preservation event and help us to document this neighborhood’s past.  If you have any questions, please call us at 767-7299, like us on Facebook at South Portland Historical Society, or stop by the museum for a visit at 55 Bug Light Park. 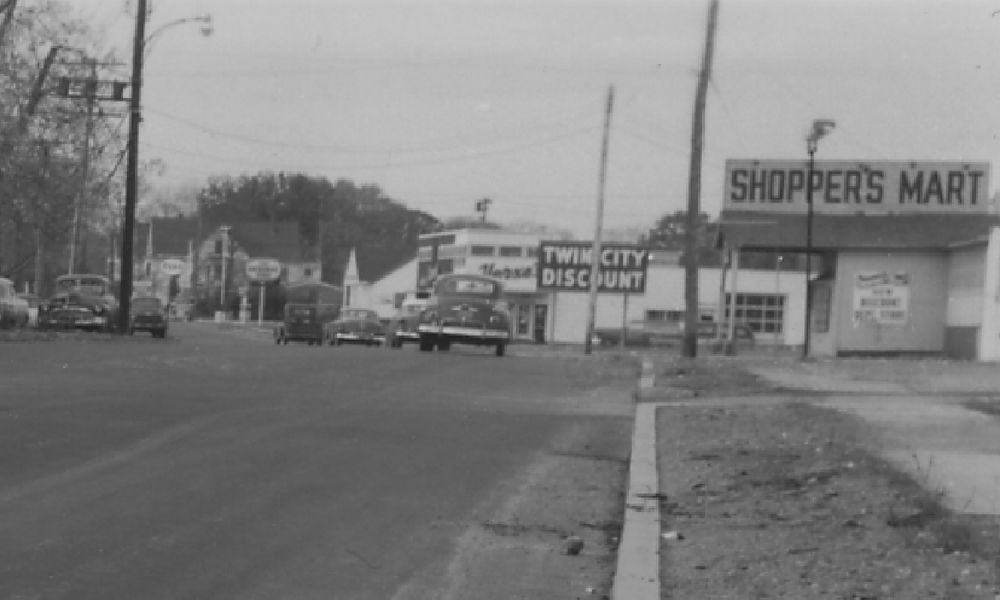 [Photo caption: The historical society is still looking for a photograph showing the Globe Discount Department Store on Broadway. In this photo from the 1950s, you can see Twin City Discount occupying the space that would later become home to the Globe. If you have any photo or piece of memorabilia from the Globe, please contact the South Portland Historical Society.]

You never know when someone will have a fond memory about a time or place in South Portland.  I was surprised when Ginny and Tom Soule who are two friends now living in Saco both remembered visiting a store I had never heard of.  On the way from their Portland home to her grandparents’ cottage at Higgins Beach, Ginny recalls her family always drove over the Million Dollar Bridge and stopped at the Globe on Broadway to get supplies.  The first trip of the summer season always meant her dad would buy her a beach ball at the Globe.

Tom told me he grew up on Kelsey Street and attended Kaler School.  He remembers shopping there and says a classmate snitched a baseball at the Globe.  As one of the many small department stores in town, it is no wonder they had everything from baseballs to beach balls!

Being one of five kids, I’ve found no shortage of meeting folks around town who were in school with one of my brothers or sisters.  I ran into Kevin Conroy who was in my sister’s class at the high school.  He tells me that a close friend worked in the shoe department at the Globe.  Kevin would go in just to visit his friend and try on shoes for the fun of it.