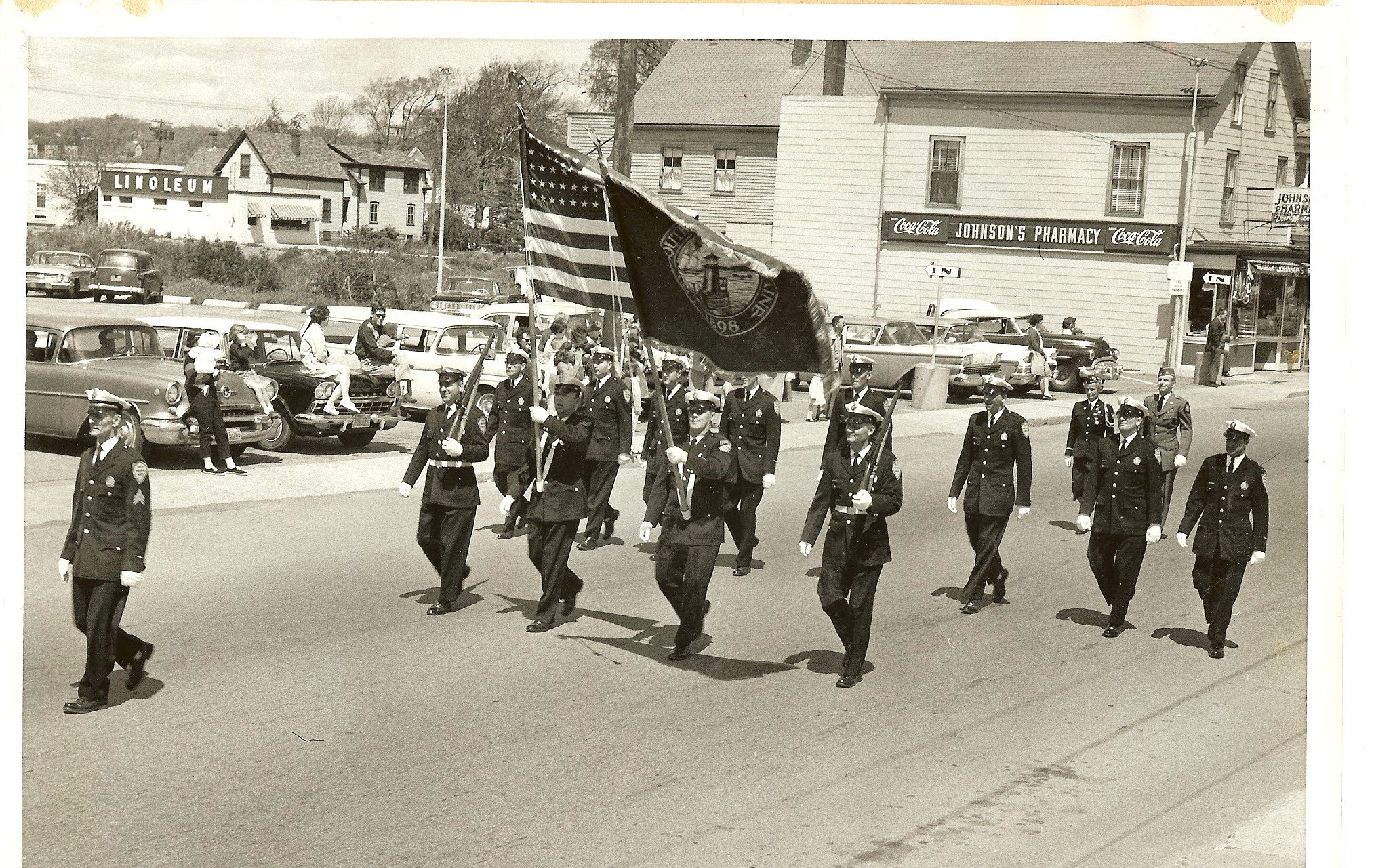 When you think of Veterans Day, I hope a picture forms of crisply dressed veterans, members of the local VFW or American Legion Post, marching bands, local groups, military vehicles and fire department apparatus filling the street as far as you could see.  With all that excitement, you wouldn’t find any of my childhood friends left hanging around the neighborhood.  We would have all jumped on our bikes and made our way to the parade route before the band started playing or the fire engines spun up their sirens.

Sister Barbara conveyed this memory of marching in the Veterans Day parade with the South Portland High School band.  This would have been in the late 1960s and she tells me she was usually in the front row with her baritone.  Barbara is now all of 5 feet tall so back then marching between two 6 foot trombone players must have been quite amusing to the people along the parade route.  She also remembers it was sometimes quite windy so it was hard to hang on to the little music stand that was loosely clamped on her baritone.  PLUS IT WAS COLD...BRRRRRR!

I found a picture recently of my sister marching in the band.  Back then the parade route went from the First Congregational Church on Meeting House Hill, down the hill on Cottage Road.  I think it was an old brownie camera that I took the picture with and it is a little out of focus.

We are now about a century removed from the so called war to end all wars.  Certainly you have heard on one TV channel or another some mention in the news about the 100th anniversary of war time events.  Now might be a good time to review just how celebration of Veterans Day came about.

World War I, known then as the “Great War”, officially ended when the Treaty of Versailles was signed in France on June 28, 1919.  Actual fighting had ended seven months earlier, however, when a temporary cease fire went into effect on the 11th hour of the 11th day of the 11th month of 1918. For that reason, November 11, 1918, is regarded as the end of the war.

President Wilson proclaimed November 11, 1919, to be the first commemoration of Armistice Day.  The war to end all wars was followed by the Second World War, the Korean Campaign, Vietnam, the Persian Gulf War and continuing related campaigns and thus the holiday has continued to evolve.  Veterans Day is still celebrated on November 11th each year, yet now is widely recognized as a day to honor all veterans, as well as those who gave the ultimate sacrifice for our country.  Please join me in celebration of our veterans - and dress warmly just in case. 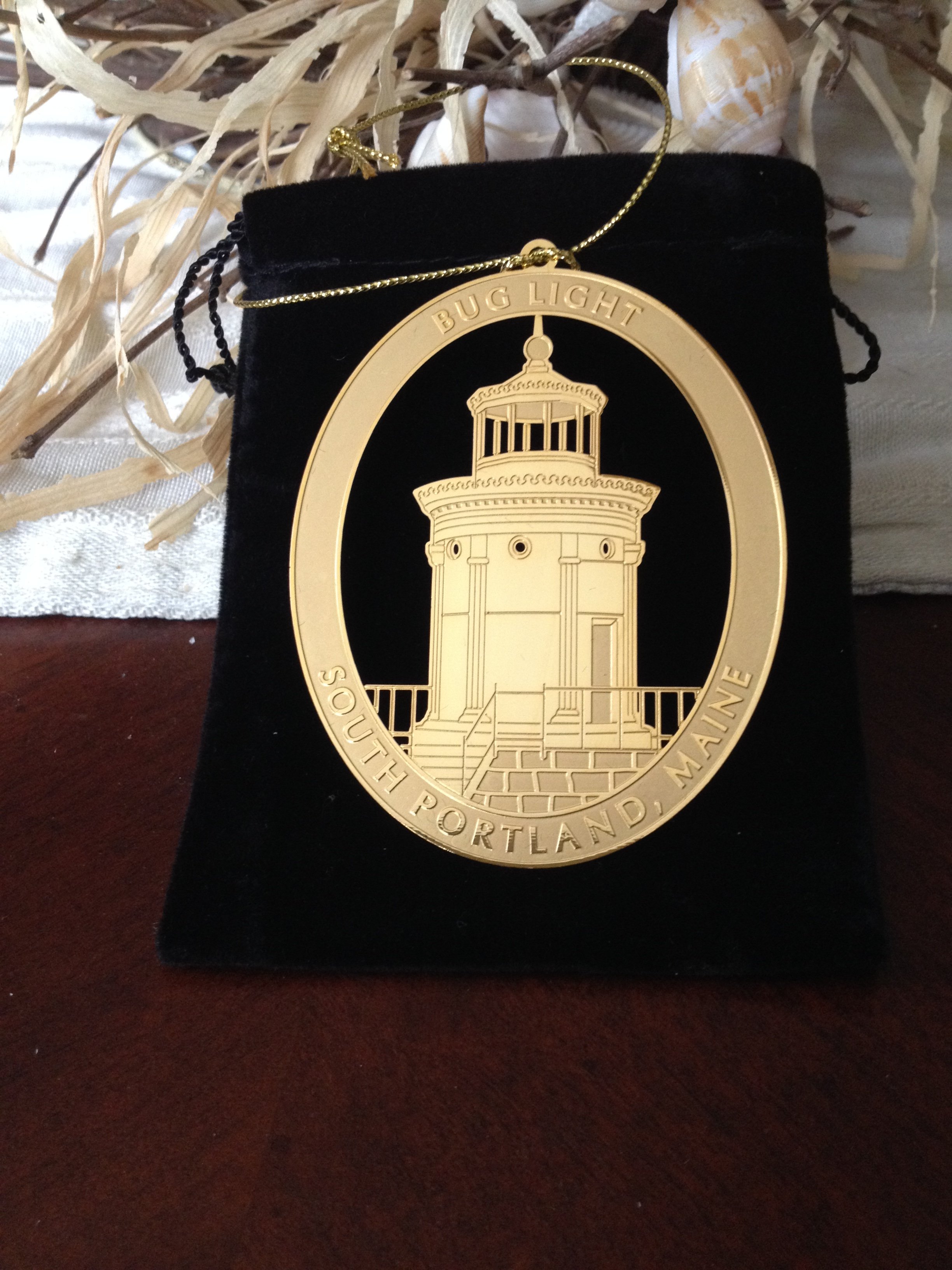 South Portland Historical Society is pleased to announce the arrival of its first holiday ornament. Society board member Chuck Igo spearheaded this effort to create a new brass ornament series which would be lasting keepsakes of South Portland landmarks. Not surprisingly, the first design chosen was of Portland Breakwater Light, more affectionately known as Bug Light in South Portland.  Bug Light is a part of the logo for both the historical society and the City of South Portland.  The lighthouse is one of only a few National Historic Landmarks which are currently designated in our city.

Each ornament is cast in a durable metal with a beautiful brass finish, and comes in a protective cloth bag. It also includes a card outlining the lighthouse’s history and which lets a gift recipient know that proceeds from the sale of each ornament go directly to the South Portland Historical Society and its museum.  Priced at $20 each, the ornaments are available for purchase at the society’s museum gift shop at Bug Light Park, open on Saturdays and Sundays from 10am to 4pm, through Christmas. You will also find them for sale at Broadway Variety and Drillen Hardware; both of these stores have graciously agreed to offer them for sale and will collect the proceeds on behalf of the society.

Speaking of the museum, our season is wrapping up quickly. There are only five weekends left before the museum closes for the season. This year’s rotating exhibit covering the Willard neighborhood will be removed in the off-season and replaced with a new exhibit covering the Meeting House Hill neighborhood. If you haven’t already, please stop by for a visit before we close on December 21.

We hope you’ll keep our museum gift shop in mind for your holiday purchases. We seek out local craftspeople and local manufacturers whenever possible to support our local economy. Gift shop proceeds are an important source of funds to maintain our museum and archives. Although the museum may be closed in the middle of the winter, we are still active inside working on exhibits, processing donations of artifacts, cataloguing our collections, doing historic research and, most importantly, we maintain year-round climate control so that South Portland’s history is preserved for future generations.  It is a tribute to the wonderful community of South Portland that we are able to maintain a thriving local historical society in our city.

FMI, call 767-7299, visit us at the museum at 55 Bug Light Park, and don’t forget to follow and participate with us on Facebook at South Portland Historical Society where we post photographs and other information related to the history of South Portland. 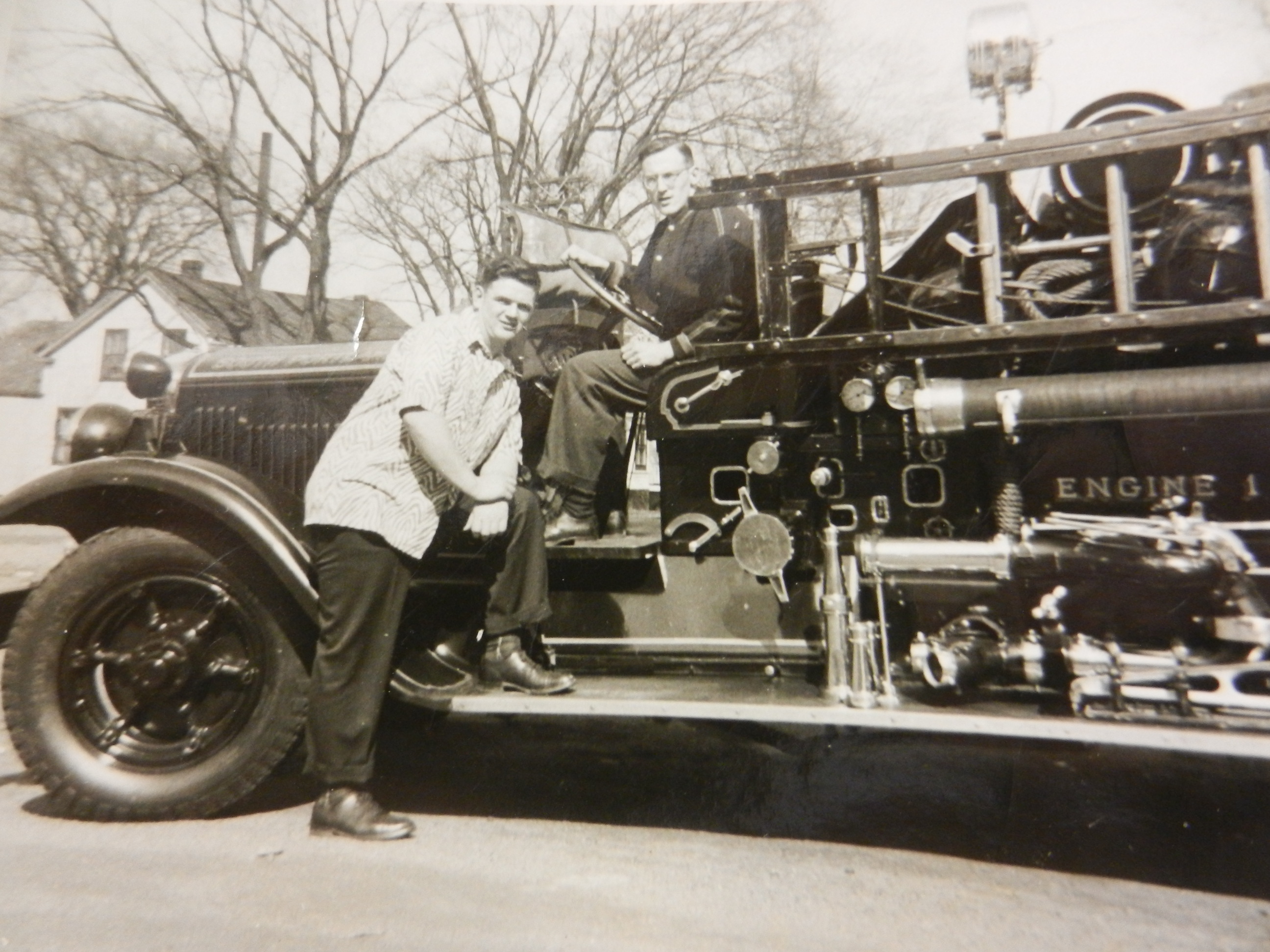 [Photo - credit: Pictured here is Ralph Cary leaning on the fender of Engine 1, a 1930 Dodge, with Jack Nelson sitting behind the wheel. Photo courtesy of Ralph Cary.]

For those interested in history and specifically local history, I highly recommend the book, “A History of Cape Elizabeth, Maine” by William B. Jordan, Jr.  Reprints of the book are available through the South Portland Historical Society.  Remember, now, that we were Cape Elizabeth a little over a hundred years ago.  This week’s glimpse through the Window again takes us back to a time just after the Great Fire of Portland.  Following is an excerpt from Jordan’s book:

“The matter of fire protection had been one subject that disturbed the people of Cape Elizabeth for many years. With the overall expansion that was going on in the northern reaches of the town, the inhabitants of this area finally took matters into their own hands and formed fire companies for their mutual protection.  In the summer of 1892 there was considerable talk in Ferry Village of the urgent need for organizing some sort of a fire company. Consequently a call was issued requesting the citizens to meet in Union Hall on the evening of September 21st to discuss ways and means.  The meeting was well attended and so enthusiastic were the participants that an organization was immediately effected under the name of the Volunteer Hose Company No. 1.

“The first Foreman was F. L. Paige, with D. V. Willard, First Assistant; A. A. Cole, Second Assistant; W. E. Nason, Clerk; and J. H. Harford, Treasurer. The membership of the company was limited to forty. At a meeting held on the 15th of February, 1893, a constitution and a set of by-laws were adopted. Work was then begun to put the company on its feet, financially speaking. The sum of $529.73 was realized through a benefit fair, and, coupled with the money raised by popular subscription, the organization was provided with sufficient funds to establish itself. The first purchase of apparatus was made on October 15th, 1892, when $150 was invested in five hundred feet of hose. It was not a very imposing beginning, but with a little ingenuity the members were able to construct a hose cart. Further equipment was purchased in March of 1893 in the form of several single ladders plus a forty-six foot extension ladder. This did away with the disadvantage of borrowing ladders, only to replace them, when they gave way through their overzealous use by the fire-fighters.”

The South Portland Professional Fire Fighters Association’s 1995 yearbook states that two days after the meeting was held to form the company, they acquired a building on School Street behind where the current building is located.  The yearbook states the value of the building at that time was $200.00 and a cart with about 200 feet of hose was stored there.  This must have been the 75 School Street location next to the former Redmen Hall.

The photo included here shows Jack Nelson and Ralph Cary who were members of the hose company dating back to the 1940s.  Ralph relates a story of a day the fire barn was on fire and Jack got in the truck to try to save it.  The yearbook mentioned above states that around noon on April 8, 1946 a boy had been walking by the building and noticed it was on fire.  He ran to a nearby home occupied by a member of the company named John Nelson.   “Jack” as he was called was 16 at the time and didn’t know how to drive the fire truck.  He knew enough to pound his foot on the starter button on the floor anyway.  By doing so, the truck lurched forward a few inches.  He kept hitting the starter and jerked the truck out of the garage until it started rolling down the driveway.  He apparently had enough sense to put it in neutral once he got it rolling and coasted across School Street bringing the fire truck to safety.

Fire stations like that were not attended and volunteers would come from home or work when the whistle was blown.  The city gave him 25 or 50 bucks as a reward for saving that fire truck, Ralph says.  The 1930 Dodge remained in service until it was replaced by a 1952 Seagrave Anniversary Series Engine.

“A History of Cape Elizabeth, Maine” was first published in 1965 and was out of print until republished by the historical society, with  permission from Mr. Jordan, in 2012.   I don’t have to tell you that it would make a great Christmas gift for yourself or a friend or family member who has lived in South Portland or Cape Elizabeth.  To buy your copy, visit the South Portland Historical Society’s museum at Bug Light Park on Saturdays or Sundays from 10am to 4pm, or call 767-7299.