The South Portland Historical Society has just opened its Cushing’s Point Museum at Bug Light Park for the 2014 season.  Several exhibits have been updated over the winter months and new featured exhibits include the history of the Willard neighborhood, as well as shipbuilding activities in South Portland during the First World War. The museum is now open daily from 10am to 4pm.

Once a quiet fishing village known as Point Village, the Willard neighborhood has gone through some interesting changes over the years.  From William Simonton who maintained a wharf and warehouse at Fishermen’s Point in the 1700s, to the heyday of Willard Beach in the 1890s when the trolley lines brought visitors to the Willard Casino and Canadian tourists flooded the neighborhood boarding houses and hotels, to more modern times when Willard Square grocers provided most of the goods that any household needed,  the exhibit covers many different images of Willard as it has developed over the years.

In its main exhibit room, the museum has featured an exhibit covering 100 years of shipbuilding in South Portland. This spring, the exhibit was enhanced to include new research which the Society has been conducting on shipbuilding in our community during World War I.  Most local history buffs are well versed in South Portland’s role in building Liberty ships during WWII, but not many are aware that we also built large cargo ships here during WWI. These Ferris-style ships were wooden ships, rather than steel, but were certainly considered very large container ships for their time.  South Portland had four active shipyards during WWI, and the exhibit covers the activities at each yard. The South Portland Shipyards exhibit is being sponsored again this year by Bath Savings
Institution.

Our thanks to all of these businesses, as well as the many businesses who support the historical society with memberships and event sponsorships. The museum will again be open with no admission charges this year, due in large part to the support of businesses and individuals in the South Portland community who appreciate history and the need to preserve it. If you would like to help, please stop by the museum to pick up a membership brochure, visit us at www.sphistory.org where membership information is available, or give us a call at 767-7299. Thank you and we hope to see you at the museum this year! 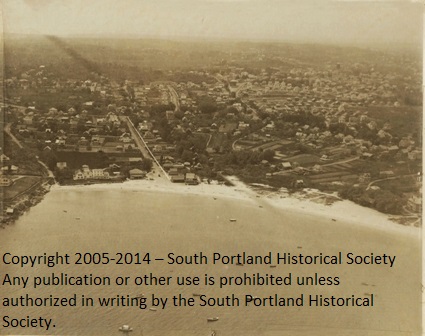 The Bug Light Kite Festival is coming to South Portland next Saturday, May 17th from 11am to 4pm at Bug Light Park.  If you’ve ever enjoyed the fun and fanciful kites flown on a nice weekend in the park, you’ll want to be sure to mark your calendar and come out to see this grand display of magnificent kites. Brought to you by the South Portland Historical Society and members of two kite clubs, the NorEasters Kite Club and Kites Over New England (KONE), the Bug Light Kite Festival is a free, family-friendly event.

The museum at the park opens at 10am, and the festival officially kicks off at 11am.  A fundraiser barbecue will start at 11am, serving hamburgers, hot dogs, sausage sandwiches, veggie burgers, and more – with proceeds to benefit the museum. The kite club members will be flying kites throughout the day and are available to help newcomers learn how to get their own kites into the air and to help with kite assembly and fixes, as needed.  A wide variety of quality kites is available for sale in the museum gift shop – arrive early for the best selection.

Portland Breakwater Lighthouse (aka “Bug Light”) will be open to the public from 11am to 3pm during the festival, thanks to the volunteers from the South Portland/Cape Elizabeth Rotary Club.

During the Kite Festival’s hours of 11am to 4pm, the public is asked to refrain from flying two-line, four-line or other sport kites; single line kites are more appropriate with the number of participants on the field. Dogs in the park should be on-leash during the festival. Parking is often limited within the park during the event, so overflow parking is being made available at Allagash International on Madison Street, and in SMCC parking lots.

South Portland Historical Society would also like to thank the South Portland Parks & Recreation Department and Saco & Biddeford Savings Institution for their support and additional sponsorship of the kite festival.

To reach the park, take Broadway east to the ocean, turn left onto Breakwater Drive, and then turn right onto Madison Street that leads directly into the park.  For more information, call 767-7299, visit www.sphistory.org or go to the South Portland Historical Society page on Facebook.

The History and Architecture of the Willard Neighborhood

Next Wednesday, May 21st, at 6:30pm, South Portland Historical Society will kick off the celebration of its 50th anniversary at its annual meeting and lecture at the South Portland Community Center. The Society has come a long way since its founding in 1964; after moving several times over the decades from one temporary location to another, the Society has finally found its permanent home at the Cushing’s Point House in Bug Light Park.

The public is invited to the Society’s annual meeting at the Community Center, located on Nelson Road. Admission to the meeting and lecture is free for current members of the Society; non-members are welcome to attend with a $10 donation. Refreshments will be served.

After a brief business meeting and election of the board of directors for 2014/15, the Society’s executive director, Kathryn DiPhilippo, will be joined by Hilary Bassett, executive director of Greater Portland Landmarks, to present an illustrated lecture entitled “The History and Architecture of Willard.” Ms. DiPhilippo and Ms. Bassett will offer photographs and discussion about the history of the Willard neighborhood and the many examples of architectural styles to be found in this neighborhood which was once a thriving fishing village. 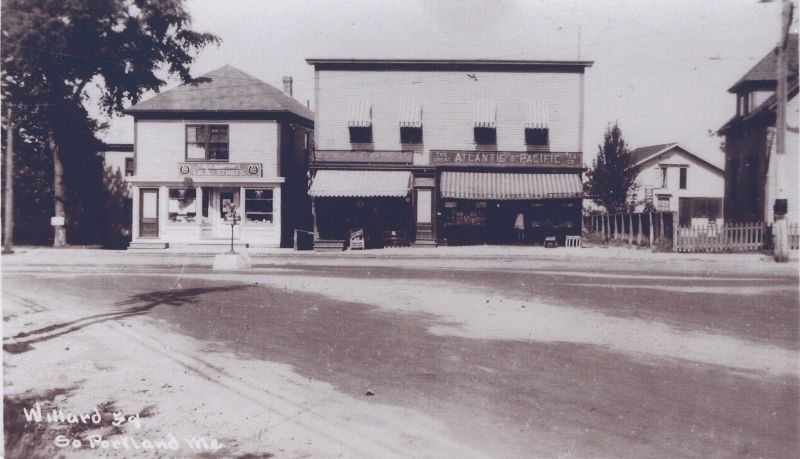 The lecture ties in with an exhibit which just opened at the Society’s Cushing’s Point Museum at Bug Light Park. The museum’s featured neighborhood this season is the Willard neighborhood. The museum is open every day from 10am to 4pm with no charge for admission. Donations are most welcomed and residents are encouraged to become a member of the historical society to support its museum and historic preservation work in our community. FMI, please visit www.sphistory.org, call the museum at 767-7299, or on Facebook, visit the South Portland Historical Society page.

REMINDER!  The Bug Light Kite Festival will take place on Saturday, May 17th, from 11am to 4pm at Bug Light Park. Admission to the festival is free and parking is also free within the park, at Allagash International on Madison Street, and in SMCC parking lots. Proceeds from the barbecue fundraiser help support the historical society and its museum ~ please plan to come and enjoy a picnic in the park! Enjoy the fanciful display of kites flown by members of the NorEasters Kite Club and Kites Over New England (KONE), and you are also welcome to fly your own single line kite (a wide variety of kites are offered for sale in the museum gift shop). Members of the kite clubs will be on hand to help beginners learn how to fly. 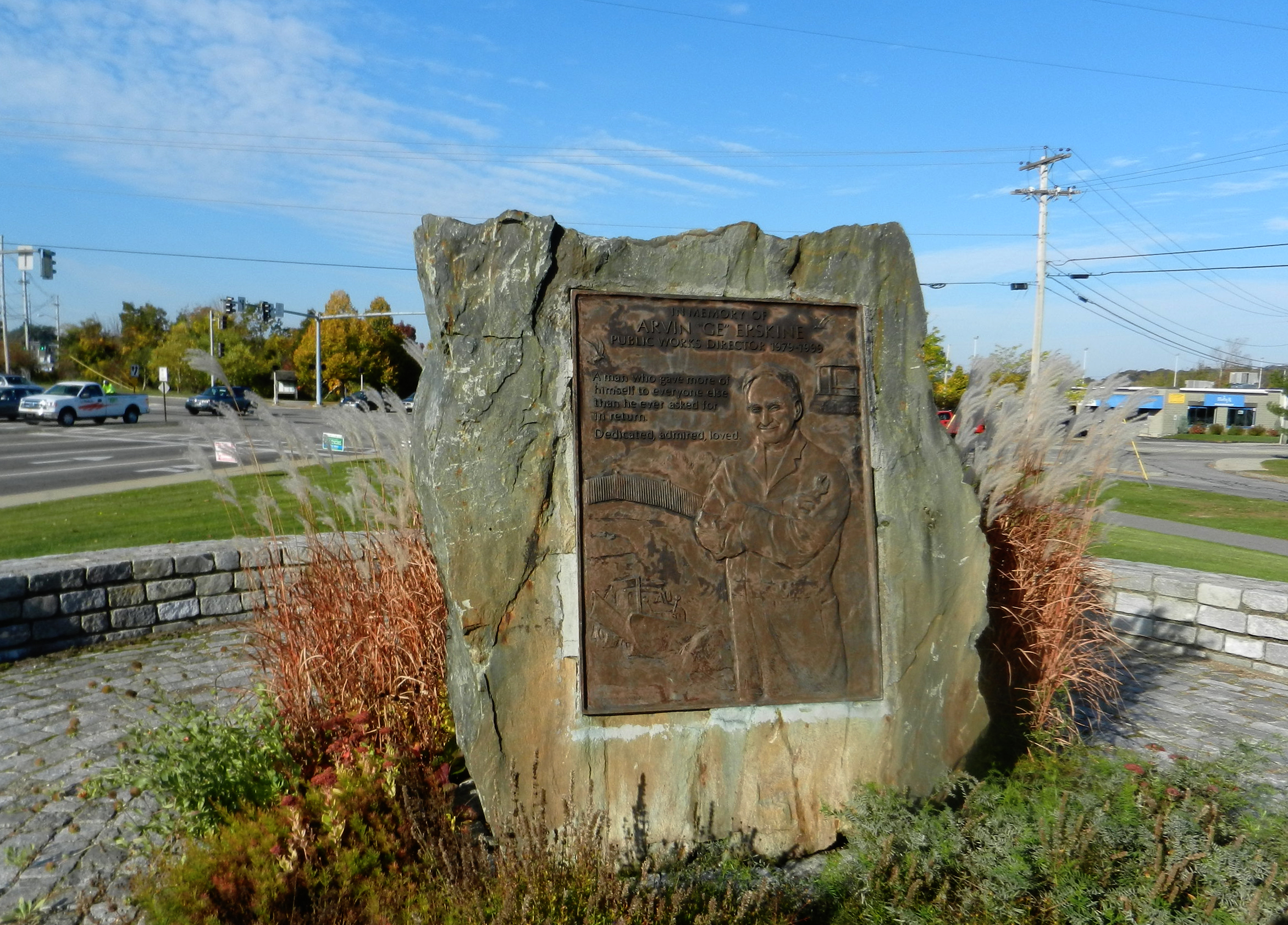 A distant cousin of ours, my mother declared, was Ge Erskine who was a very well-known director of South Portland Public Works from 1979 until 1999.  As my mother would tell us, our Irskine heritage merged with Ge’s family tree when somehow the “I” in our family history became an “E.”

Adjacent to the Greenbelt Walkway, the park is a wonderful place to stop after you’ve picked up a coffee at either of the two coffee haunts next to it.  Seating near the sculpture gives you a bird’s eye view of the daily hustle and bustle of commuters.  Ignore all that and focus your attention on the park around you while you enjoy a pleasant and relaxing moment.  I enjoyed watching the hikers and bikers traveling along the Greenbelt.  The park is one of many green spaces South Portland has to offer and I recommend you visit them all.  I’m sure South Portland must be near the top of great places to live.

A lot of folks worked really hard to make Ge Erskine Park happen and I’ve got to believe it all came from the heart.  Jim Gailey tells me that selection of the rock to mount the sculpture on took longer than expected because it was difficult finding just the right one.

One of Ge’s focuses was raising money for the Jimmy Fund where he served on its Advisory Board.  In 1973, he and three of his friends walked from South Portland to Fenway Park in Boston.  It took them four days and they arrived for the State of Maine Day game.  That event raised more than $4,000 for which then-Governor Ken Curtis honored Ge’s efforts.   Ge was also honored with the South Portland Sentry’s Great Person Award.

The dedication occurred on October 25, 2003, including an introduction of the sculptor by Ralph T. Kilgore, former City Councilor.  Ralph would tell you that Ge would help you with your plumbing on New Year’s Eve.  That’s just the kind of guy he was.  Noteworthy speakers who also shared fond memories included then-State Representative Louis Maietta, Jr. followed by a humorous tribute to Ge from his good friend Marshall “Jack” Gibson.

You need to know a bit about Jack.  Although Jack recalls selling magazines from the early age of 8, he was 16 when he bought his first tar truck.  From that enterprise and a lot of hard work Jack built Commercial Paving into a multi-national business.  Jack credits Ge for his expansion into recycling which allowed his company to become a local leader for processing and reuse of contaminated soils.

Jack’s success is exceeded only by his caring and generosity toward cancer patients.  From a personal level, Jack loves to bake and I had an opportunity to try his signature Granny Kirkwood shortbread which he lovingly makes for the staff and patients at the Gibson Pavilion.  Jack can be found handing out his shortbread while he visits and comforts cancer patients every Sunday.  The Gibson Pavilion is in honor of Jack’s wife who lost her battle with cancer.  It is a wonderful place where my dad received excellent care during his treatment for cancer.

At the park dedication, Jack related how his friendship never prevented Ge from taking him to task when his company was involved in city projects.  Jack went on to say that Ge was a lovable guy who had an uncommon work ethic and dedication to duty.  Best of all, Ge had a wonderful sense of humor.  Ge’s favorite story, Jack said, was about the day he was short staffed on rubbish trucks.  Ge decided to fill that position himself that day and jumped on back.  Coming to a stop at one driveway on Walnut Street , Ge observed a lady who must have overslept, and had jumped out of bed when she heard the truck and realized her trash wasn’t put out.  She flew out the back door with her hair in curlers and bathrobe half off.  Out of breath, she ran down the driveway waiving for the truck to stop, yelling, “Am I too late for the rubbish?” to which Ge replied “No, lady – hop in!"

As Jack explained to me, Ge always had a story to tell him and Jack shared a few of his with Ge too.  With such rich lives, there ought to be a book someday and Jack will have to write it.  I’ll be the first in line to get a copy and I expect there will be a lot of Ge in there, too! 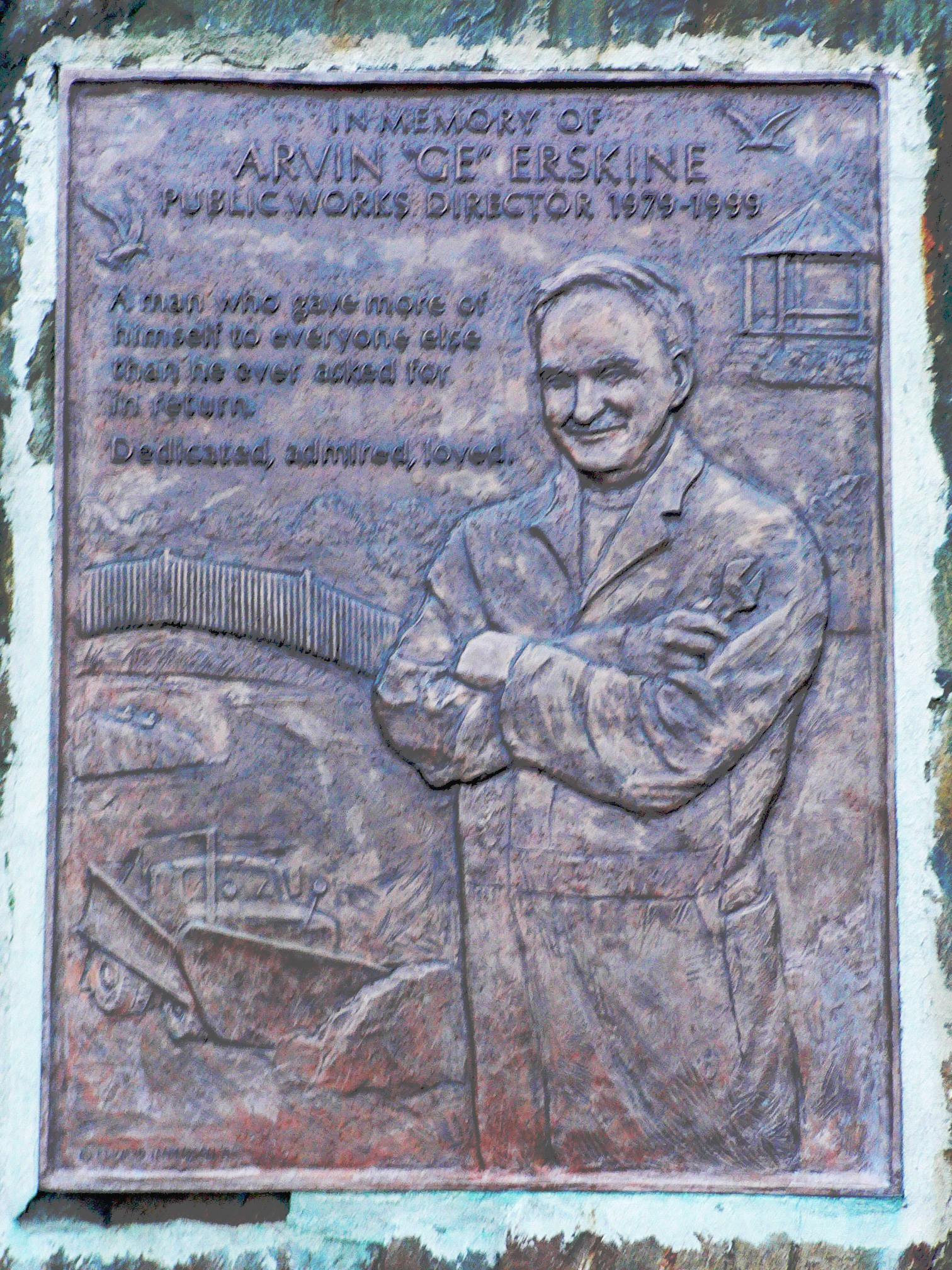