The Carolyn’s Catering I first remember was on Cottage Road not far from the Portland Players Thaxter Theater.  My mom worked there for many years when I was grammar school aged.  I think the flexible hours allowed her to be home most days when school let out.

On days when they were getting ready for a large function and mom wouldn’t be home after school to meet me, I would walk a short distance from Roosevelt School on Pine Street to the shop.  The ladies in the kitchen would give me some small job to make me think I was helping out.  One of the jobs was to keep an eye on the potatoes bouncing around in the peeler.   Food processors of the time were nothing like those small counter top devices seen today.  Carolyn’s had a potato peeler that would spin a bag of potatoes while the rough surface on the inside of the drum would rub off the skin.  When the potatoes looked all white, my job was to shut the contraption off.  I suppose if you walked away from the peeler and didn’t watch it; the peeler would have consumed the entire potato in the process.  Mark Aitkenhead, who worked there for his dad who owned Carolyn’s at the time, told me they also had a machine called a Buffalo which was the industrial version of a food processor with 6-inch spinning knife blades.

The crew made enough potato and egg salad to feed an army.  I could have climbed into the pots they used to boil eggs or potatoes and closed the cover (think Hansel and Gretel).  There must have been ten dozen eggs in those huge pots and I became no stranger to peeling egg shells since there wasn’t a machine that could do that.

The busy folks in the kitchen were interrupted from time to time by the ringing bell hanging above the door when walk-ins would stop by to purchase their signature poppy seed dressing.  My sister Jean recalls they always had Andes mints on the counter and she would help herself to a few.  My other sister Barbara who waitressed a few summers at catered events recalls the potato salad and seafood Newburg were big favorites that the guests raved about.  Carolyn’s also featured their potato salad and cole slaw at the Pond Cove IGA.

Phyllis Hall owned the business before Walter Aitkenhead bought the outside catering in 1970 and operated it for 20 years.  Mom always called him Wally and that is the name I associate with Carolyn’s Caterers.  Wally told me during a phone interview from his home in Georgia that my mom was a big help to him when he took over the business from Phyllis.  The timing was perfect for our family.  With mom working there, both of my sister’s wedding receptions were catered by Wally and held at a beautiful home known as Heatherstone on Shore Road in Cape Elizabeth.  Phyllis Hall continued to cater functions at Heatherstone after she sold Carolyn’s to Wally.

Carolyn’s was known to cater some impressive functions on the shores of Falmouth Foreside and Cape Elizabeth and more than once were called upon by Barbara Bush for wedding receptions at Walker’s Point in Kennebunkport.  Mark also remembers catering functions on ships built at BIW during what he said were “shake down cruises.”  One of the most requested dishes he says was the Marinara with Tenderloin.

Wally told me that he and the crew catered a wake in 1986 for Rudy Vallee in Westbrook where Vallee grew up.  Rudy was known as a “crooner” which described a singer who might have been seen with a mega-phone.  With such a soft voice, Rudy Vallee was well suited for the new medium of his time called radio.

Other notable events, Wally reported was catering the openings for both the Mill Creek and Forest Avenue McDonald’s Restaurants.  I said that was odd as they could have handed out hamburgers and he laughed.  He also said they packed up and went to Washington D.C. to serve lobster rolls at a Washington Press Club event.  I noticed a touch of pride in his voice when he commented that they catered more than 2,000 weddings during his 20 years owning the business.

The original Carolyn whom I never met started her business in a basement at 75 Pine Street selling ice cream and candy.  A couple of well-known sisters, Henty Larou and Belle Graney, related a story to me of when Carolyn would make candies and place them in a basket for Henty and Belle to take around the neighborhood to sell.  The sisters tell me that Carolyn graduated from Leland Powers Drama School in Boston and upon returning to Maine gave them “elocution lessons” for 25 cents per half hour.

Carolyn’s was around for more than 50 years and certainly is remembered for their fine catering. 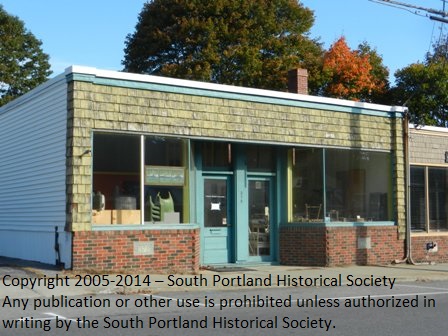 If you are a creature of habit like me, you may look forward to seeing the same smiling face hand you your morning coffee at the local coffee shop or you steer your grocery cart to a particular check out person each week at the grocery store.  Such was the case for many veteran bus riders who climbed the stairs to board a South Portland bus on their daily commute.  We are going back more than a decade or so, and I hope some of you out there might remember this.

The blue and white South Portland buses have become a well-known sight around our fair city, yet many citizens may not know that we didn’t have our own bus department until the early 1980s when then City Manager Bob Ganley, working with department heads, determined it would be less expensive for the city to run its own bus service than to pay the annual member fee to Portland METRO.  That might be a story for another day.

One of the original staff of the South Portland Bus Service which began in January of 1983 was Roger Roscoe.  Always in good humor, Roger took great pride in serving the needs of riders, enjoyed kidding with passengers and on occasion playing a joke.  Such was the case when the replacement for the Million Dollar Bridge was under construction.  Roger had some of the passengers convinced that the bank drive thru, under construction next to the Wendy’s Restaurant, were actually toll booths for the new bridge.

Roger was known to dress up as Santa on Christmas Eve and I have heard stories that he entertained riders with a bit of singing now and then.   He took great pride in being a professional transit bus driver and came in second place at the 1994 statewide Maine Department of Transportation and Transit Association “Roadeo” only missing first place by a half point.  Promising then to “be back next year” Roger was sure to his word and won first place in 1995.

On October 24, 2002, Roger slowed his bus while pulling to the curb and suffered a heart attack.  Anyone who boards a bus today on Pillsbury Street at Willard School Park will know that a bus shelter and plaque honoring Roger’s 20 years of service was dedicated by Mayor Ralph Baxter on January 20, 2003.  I remember standing there on that cold day during the dedication when Mayor Baxter honored the legacy of Roger and the many others that have made great contributions to our city as they serve behind the scenes.

The Willard School Park is an especially pleasant place to visit and on a warm day and you may want to stop in one of the local stores to pick up the fixings for a picnic lunch.

Note to readers: Please help us locate information or photographs related to Deering Ice Cream Restaurant that was on Broadway near Mill Creek Park. If you have any info to share, please contact us at sphistoricalsociety@maine.rr.com or at South Portland Historical Society, 55 Bug Light Park, South Portland, ME 04106, 767-7299. Thank you! 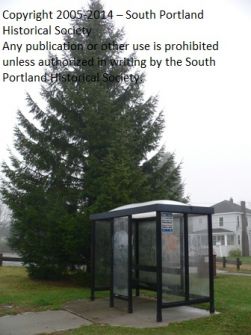 Sometimes getting the story involves a bit more than you might imagine.  I discovered this old photo of a building on High Street in Ferry Village when going through the historical records at the South Portland Church of the Nazarene and a member suggested I talk with Blaine Jardine about it.  When I crossed paths with Blaine and in the short moment we could talk, I asked him to tell me something about Boy Scout Hall.  He said, “I painted that place twice.”  On my second chance to speak with Blaine, he said, “I painted that place twice.”

By all accounts, the building was not well known as Boy Scout Hall.  Our old Boy Scout in this story who says he attended a few meetings there, says that the building was not insulated and he doesn’t remember it being used by the Boy Scouts more than a few months.  His uncle, Everett Doughty owned the building and Blaine says he didn’t dare to let them use the woodstove for fear they might burn the place down.  Winter meetings were out of the question.

Blaine says aside from being too cold to use the building in the winter, he and his brother didn’t attend many meetings because they had to walk from their home on Sawyer Road in Cape Elizabeth.  He did reveal that both times he painted the building it was done in white and yellow with green trim.  His brother Everett, who was named after their uncle, did give him some help painting it the second time!

As far as the building’s other uses, Blaine tells me that his uncle was a hoarder and filled the building with contents of relatives’ homes when he cleaned them out.  It was all junk as far as Blaine was concerned.  There were a bunch of stoves made at the Portland Stove Foundry in there and antique toasters that, in retrospect, he says might be worth a chunk of money today.

Boy Scout Hall was modified with overhead doors on the High Street side and now spends its days as an attractive looking garage.

History Detectives, help us learn more.  I encourage you to forward any stories or information you might have about Boy Scout Hall to help us complete the story. Contact us at the South Portland Historical Society, 55 Bug Light Park, South Portland, ME 04106, phone 767-7299. 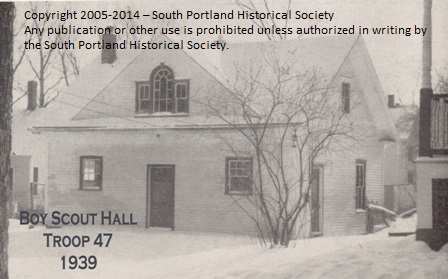 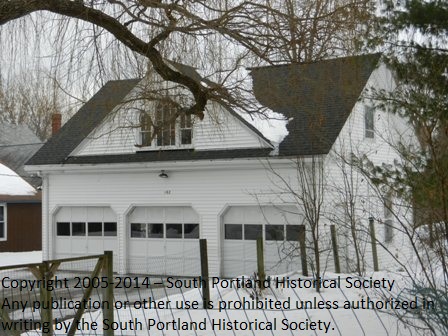