On a cool and windy day, bag pipes sounding Amazing Grace were heard by the family members, firefighters and city officials who gathered in Firefighters Memorial Park for the dedication of a park bench.  It was September 9th 2007 when Mayor Claude Morgan read a proclamation establishing it to be Robert E. Wallingford Jr. Day.  Captain Wallingford, or Bobby as he was known, lost his life while on scene at the Portland Welding fire on August 27, 1996.

Firefighters Park sits amid Cash Corner at the former location of a school house that was built in the early 1850s.  The school operated until 1925 when the building was then determined to be a fire hazard and was condemned.  The property was sold and an auto repair garage operated there for the next couple decades.  In the 1940s, the City bought the property back as a home for Engine Company No. 5 who occupied that location until a new fire station was built a block away at 360 Main Street in 1970.

The old building was torn down and the land sat vacant and unnoticed for a time.  The events of 9/11/2001 changed all of our lives.  A group of South Portland firefighters who returned from memorial services for fallen firefighters in New York City reflected on the need to honor our local men and women.  The vacant former site at 306 Main Street that housed Engine Company No. 5 seemed a fitting place to establish a memorial park.

A year later on the first anniversary of 9/11 a dedication ceremony for Firefighters Memorial Park was held.  As an apt reminder just one year after that on the first anniversary of the Firefighters Park dedication, the Thornton Heights Lions Club held a ceremony to dedicate their donation of a flag and flag pole on the site.  The city stepped forward a short time later and installed lighting to ensure that the American flag gracing the park was property lit.

The historical connection to firefighters at Cash Corner certainly makes this a fitting location for a memorial park and the bench placed as a memorial to Captain Wallingford is a fitting tribute to his service both as a firefighter and civic volunteer in our community. 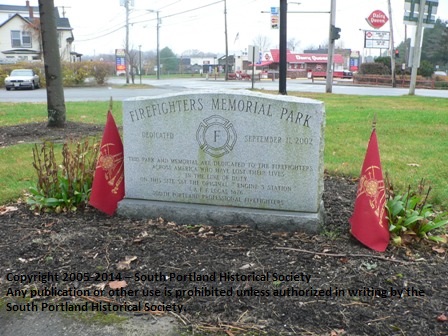 I am reading a book about Henry Ford that a good friend picked up for me at the Friends of the Library Book Sale.  In it, the author describes how a man was asked, in the year 1915, “What is the greatest accomplishment of your time?”  The man’s reply was, “The Model T.”  Fast forward 100 years and someone asked the same question today is likely to say the “I Phone or the laptop computer.”

One hundred years ago the Model T, or the automobile in general, would have allowed you to travel further away from your home and more freely and unchained than travelers were by train travel.  Today with a laptop computer or smart phone you can instantly communicate with anyone, anywhere around the world or access information on that same scale.  Hardly a few decades ago you might have talked on the phone while tied by a curly cord to the other end of the phone in your kitchen and access to information required a trip to the library or corresponding with someone through the mail, taking days if not weeks to find your answer.

The laptop computer or cell phones on the other hand would not exist today if it were not for the invention of the transistor and significant achievements in semiconductor technology that happened right here in South Portland, Maine.  People from around the world perhaps give little thought to the amazing and tiny microchip found inside almost every electronic device around us.

Fairchild Semiconductor opened the South Portland facility on Western Avenue in 1962 shortly after a patent was granted to its co-founder Robert Noyce for a monolithic integrated circuit.  The process involved etching multiple transistors on a single wafer made from silicon extracted from sand.  Prior to his development of a new process for making multiple transistors on each wafer, a transistor could only be made one at a time.  Fairchild Camera and Instrument Corporation launched with an order from IBM for 100 transistors.

Nothing like the dirty and smelly assembly line churning out the Model T, the fabrication of wafers containing integrated circuits, more commonly known as chips, is performed by folks dressed in “bunny suits” where they look more like astronauts, in rooms that are cleaner than the operating rooms at local hospitals.  Manufacturing something smaller than the eye can see has to be done in a dust free environment because a simple piece of dust will ruin the intricate and microscopic product.  Vibration is also a factor in manufacturing chips.  The facility most recently built next to the Portland Jetport has an incredibly thick foundation specifically designed to dampen the vibration from jets landing on the adjacent runway.

It is amazing to think that something made here in our home town is shipped to computer makers and manufacturers of electronic devices around the world and has an incredible impact on our lives as well as almost everyone else on the planet. 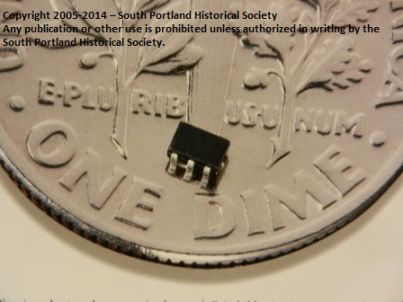 I drove down Pine Street the other day to get a picture of Roosevelt School for this story and discovered that there is no good angle from which you can take a good picture of the building with the exception perhaps of an upstairs window in the home across the street!  Looking at it, you can’t help but notice that it is a handsome building, a fact that would not have occurred to me oh so many years ago when I attended school there.

Although the school department could not confirm for me which Roosevelt the school was named for, I'm going out on a limb here and assume that it was Teddy Roosevelt because construction of the building was completed in 1928 about half a decade before Franklin D. Roosevelt became president in 1933.

I was delighted to discover that my old school was designed by no other than John Calvin Stevens and his son in 1927.  I love his work and if you look for it, you can find he had quite an influence on architectural design here and nationally for over half a century beginning in 1880 until his death in 1940.

Everyone I’ve talked to about Roosevelt School asks if I remember Miss Merrill as a teacher.  As far as teachers go, I can only remember a few of mine and she would have to be the most memorable.  Miss Merrill was a fixture around South Portland long after retirement and I recall seeing her here and there and at the grocery store or bank.  I don’t think she ever changed over the years.

The other teacher of notoriety at Roosevelt was the principal who also taught sixth grade.  I’ll just refer to him as Mr. K.  He was a tough cookie and without going into a lot of detail, I will say he made a big impression upon me not to “wise off” in class.  Another student from Roosevelt, Steve Dunn told me he was sliding down the snow bank outside the school grounds one winter and crashed and split his head open, needing several stitches.  He recalls being more worried about what Mr. K. was going to do to him for going off school grounds than having to go to the hospital for stitches.

We used to walk home for lunch!  In the direction I walked, our crossing guard was Mrs. Bonaventura who saw to our safety crossing Cottage Road for years.  We all got a chance to be crossing guides and wear a belt like Mrs. Bonaventura’s complete with a silver badge.

We played endless kick ball on the Roosevelt School playground and other than memories like that, I recall a girl named Susan in my class pedaling up to me on her bike that had a banana seat.  When she stopped, she took off one of her sandals and slapped me across the face with it.  I guess she liked me.  We never got married though.

A drop in school enrollment and consolidation left Roosevelt School empty until it entered a new phase when the city leased the building to the Spurwink School in 1985.  Spurwink School, which provided mental health and educational services for children, occupied the building until the summer of 2012.

I am happy to read that Roosevelt School may enter a new chapter in its life as residential condominiums.  The City carefully selected a developer from several that bid for the property opting for something that is believed will be a better fit for the neighborhood than other proposals.  I look forward to the open house when the units are finished and might be tempted to buy one.  How nice it might be to live in your old kindergarten room. 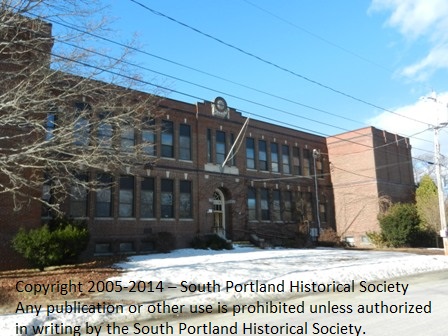 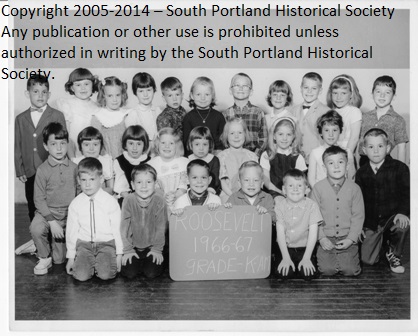