As St. John the Evangelist Church prepares to close its doors, there will be two chances to attend final Mass: the final weekend Mass will be on Saturday, September 7, at 5:30pm, and the final closing Mass and reception will be on Wednesday, September 11, at 7pm.

The origins of St. John’s date back to 1855 when the Catholic Diocese of Portland purchased land in the Cash Corner area to establish the Calvary Cemetery; in 1860, a small memorial chapel known as the Mount Calvary Chapel was built in the cemetery. In 1910, Sunday Mass was offered in the Calvary Chapel by the cemetery director, Rev. Timothy Houlihan.  In 1926, the small chapel was upgraded and expanded to serve the growing populations in the Cash Corner, Ligonia, and Thornton Heights neighborhoods. As the number of parishioners continued to grow, however, work began on a new church on Main Street in 1939; the church was blessed in 1940 by the Most Reverend Joseph E. McCarthy and named St. John the Evangelist. Rev. John Ryan celebrated its first Mass in 1940 and he served as St. John’s pastor from 1940 until 1971.

According to records from the church, in 1959, “Father Ryan requested the services of the Servants of the Immaculate Heart of Mary (Good Shepherd Sisters of Quebec) to take the lead in coordinating religious education programs” at St. John. “The convent residence for six teaching Sisters was connected to the school building by a breezeway. The Center was opened on November 8, 1959. On January 10, 1960, 665 elementary students and 140 high school students enrolled.”

In 1962, with 700 families now registered at St. John’s, the church underwent enlargements and improvements to accommodate the growing number of parishioners. The number of families was at an all-time high in 1988, with 1,880 families registered at St. John. St. Maximilian Kolbe parish was established at that time and St. John’s Scarborough parishioners moved to the new parish.

Our thanks to Shirley Estabrooks, Robert Ferrante, Sister Elaine Lachance, and the rest of the St. John’s History Committee for providing information related to the history of St. John the Evangelist Church. We wish for a smooth transition for all of the St. John’s parishioners who will be moving to other local parishes. 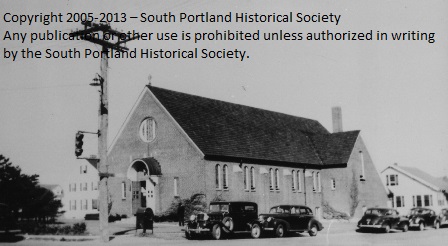 St. John the Evangelist Church before the 1962 addition

We hope that you will register now for the upcoming Bug Light 5K, presented by Anthem Blue Cross Blue Shield of Maine. This 2nd annual race/walk will take place on Sunday, October 13, and is a benefit for two South Portland community non-profits: the South Portland Historical Society and the South Portland Land Trust. The race organizers from both organizations are working hard to create another great event this year.  You can expect the same great course that follows our scenic waterfront, directional assistance from the U.S. Naval Sea Cadets, post-race refreshments, awards, and several improvements including chip timing and a kids’ fun run.

Why register now?  Registering early helps us know how many people to expect so that we can plan the best event possible.  There is also a deadline for receiving a free tech t-shirt with your registration: Monday, September 16. This year’s shirts have a beautiful new lighthouse logo, shown at right, designed by Donna Duquette.

Of course, with chip timing, avid 5Kers can get an accurate time and, hopefully, record their personal best time of the year. There will also be awards for the top finishers by age category.  But you don’t have to be a competitive athlete! We encourage people of all ages and abilities to participate, get some exercise, and stay healthy. Did you know that one of the best things you can do to enhance your memory as you get older is to walk and be active?  Studies are now showing that a daily walk does more for your memory than doing crossword puzzles.  And when you walk the Bug Light 5K, along with improving your own health, you are supporting the work of both the South Portland Historical Society and the South Portland Land Trust.

For more information and to register for the race, go to www.buglight5k.com. Your $20 registration fee supports parks, trails, and historic preservation in South Portland. Please register today…and get walking! 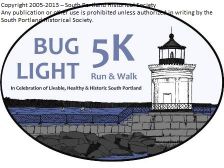 My childhood neighbor Brian Fox remembers the penny candy for which our local dentist Dr. Thurston was grateful for the resulting business!  I fondly remember the little wax soda bottle-shaped candy filled with colorful syrupy liquid.  I would bite off a chunk of the little bottle, drink the liquid inside and chew the wax-like gum.  The sweet flavor quickly was lost and it did not make for very good gum.

My parents would shake their heads over the junk I would bring home from there.  I saved my pennies for what must have been a whole summer to buy a chintzy dinner bell fashioned like a small gong that sat collecting dust next to the cash register.  Stuart’s probably had that bell on the counter from the day it opened and I just happened to be the sap that came along and relieved them of the trouble of tossing it in the trash the day the business closed.  My memory may not be so good and others may do better to remember, yet I’m trying to recall the name of the little old lady who stood watch behind the counter.  Your shared memories would be greatly appreciated.

I have scowered photographic records including “South Portland: A Nostalgic Look At Our Neighborhood Stores” by Kathryn Onos DiPhilippo and was not able to find a picture of Stuart’s 5 & 10.  We ask your help in allowing us to copy or scan any photos you may have of buildings, events, or people of historic significance related to South Portland.  A photo of Stuart’s would be a truly special find.  I hope my Fond Memories stir some interest in folks to help the South Portland Historical Society record and preserve our history. Please contact the society at 767-7299 or sphistoricalsociety@maine.rr.com if you can help. 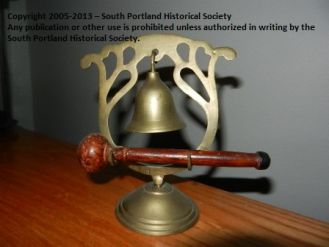 Those familiar with the South Portland Historical Society’s museum know that we feature one of South Portland’s neighborhoods each year. Last year, we exhibited the history of the Thornton Heights neighborhood, next year will be the Willard neighborhood, but for 2013, the Pleasantdale area in the center of South Portland has been the featured exhibit.  Pleasantdale covers the area between Anthoine and Evans Streets, from Highland Avenue to Turner’s Island on the Fore River. Quite appropriate for 2013, as this has been a very active and evolving neighborhood this year, with the opening and closing of Frosty’s, the reopening of J.P. Thornton’s Café and Deli, the opening of Tony’s Donuts across from Amato’s, and the soon-to-be coming pizza place and bowling alley.

The accompanying photograph comes from the Ed Inness collection and shows the area at the heart of Pleasantdale in the early 1950s. Broadway runs left to right at the bottom of the photo and Elm Street runs perpendicular to it in the middle. At the top, center, you can see the Elm Street United Methodist Church on the right side of Elm Street on the corner of Chapel Street. At the bottom, center, you can see the building, also at the right side of Elm Street, which is still there today with Diva Hair Studio and several other occupants – but in the early 1950s, Ward’s Drug was operating in that store front with, from what I hear, a really awesome soda fountain. By the 1970s when I lived in the neighborhood (you can see the very edge of my house at the lower right of the photo), L & A Variety was the corner store. That was back when it was 5 or 10 cents for a box of Good & Plenty or Boston Baked Beans, and soda was sold only in glass bottles. I remember clearly when the “Big Boss” of Pepsi arrived on the scene and you could now buy your soda in that huge 2 quart (not liter) plastic bottle – never seemed to taste as good as a cold soda in a small glass bottle, though (that reminds me of The Pop Shoppe in Mill Creek in the ‘70s, but I digress).

If you start at the Broadway intersection and count the rooftops on the other side of the street, you’ll see that the third building to the right is rather long – that is the old Pleasantdale Red & White grocery store, run by Frank Demmons at the time this photo was taken. By the late 1960s, the business there was T’s Variety and an explosion destroyed the building; in 1969, the House of Frames opened in a new building on that site and it continues in operation today.

Our thanks to the very generous local businesses who sponsored our Pleasantdale exhibit this year: Duval’s Service Center, Flynn & Company Real Estate, Noyes Hall & Allen Insurance, and Town & Country Federal Credit Union.  If you want to see the Pleasantdale exhibit, please make plans soon! The exhibit will be on display only through 2013, and please note that our hours will be changing at the end of October. We are open now through October 27th, daily from 10am to 4pm. After October 27, we will change to our weekend-only hours: Saturdays and Sundays from 10am to 4pm, through December.  The Society’s museum is known as the Cushing’s Point Museum and is located in Bug Light Park – at the eastern end of Broadway, take a left on Breakwater Drive, then turn right onto Madison Street that leads into the park. You can also reach us at 767-7299 or on Facebook at South Portland Historical Society. 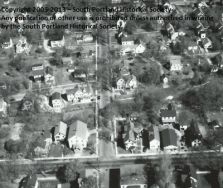