I never would have guessed that Mill Creek Park was once the South Portland city dump until a recent interview I had with longtime South Portland resident Dr. Harris Hinckley. Hinckley mentioned a vivid memory he had as a child when the dump had caught on fire and everyone in town went down to watch, including Harris, and his father, George Hinckley. “Martel Green, a fixture in town, was busily running back and forth to the brook filling a can with water and throwing it on the fire.” Harris' father was disgusted by the fire and pushed to turn the dump into a park. He worked for the creation of a Parks and Recreation Commission and was its chairman.

In the summer of 1946, Harris and five others were called upon to put loam on the park by hand. "I still have this picture in my mind of piles of dirt like Hershey's kisses, and we would attack each one," said Hinckley. The park was improved little by little and, according to Hinckley, was, "pretty simple for a long time." After digging up mounds of dirt filled with bottles and cans, the pond was created and filled with water lilies from the Hinckley family home on Scamman Street. Hinckley said that he didn't think people used the park as they do now, and enjoys the way the park looks today. 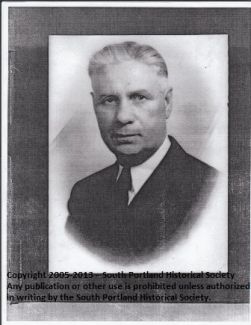 A&W root beer disappeared from my memory for a long time until I started noticing cans and bottles on the shelves in local stores in recent years.  I don’t remember bottles and cans when I was a kid.  I remember it coming in something more like a milk jug.

We didn’t eat out much when I was a kid because it wasn’t something a family of seven, supported by one income, did often.  I do remember a rare visit to the A&W drive-in restaurant on the corner of Wallace Avenue and Main Street in South Portland, however it wasn’t an outing for a burger. I was on an errand with my dad to pick up a gallon jug of root beer to bring home.

Everybody got a taste of root beer in our family and, if there was any left over, one or two of us would get a taste of the stuff the next day.  After that, it was all just a sweet memory for a long time until that rare occasion when we would get some more.  My memory is that it wasn’t real fizzy like soda today, yet had a sweet syrupy quality.

Drive-in restaurants in general have disappeared from this area, however there are a couple left on the road to Cooks Corner in Brunswick where you park your car and turn on your headlights until someone comes out to take your order.  I can picture the metal tray they hung on the driver’s window where your meal would be delivered when ready.

A&W traces its roots, so to speak, back to 1919 when Roy Allen, the “A” in the name, set up a roadside drink stand in California to sell his root beer during a parade honoring returning veterans from WWI.  The “W” came about when he partnered with Frank Wright in 1922 and they opened a stand in Lodi, California.  Roy Allen took the company to a new level selling some 450 franchises after the end of WWII and he maintained control of quality through his sale of the syrup to each one.

Roy Allen’s secret recipe drink was only available at drive-in restaurants until he introduced cans and bottles in the California and Arizona market in 1971, however it took time before it made it to the east coast.

The city directory first indicates A&W Drive-in Restaurant at 798 Main Street in 1959 and business continued there until closing in 1985.  The property sold not long after and the building was torn down to make way for Southside Plaza currently located there.  Although the building is long gone, my fond memory of going there to pick up and enjoy A&W’s tasty root beer will last forever.

Photographs of the property are rare and the historical society would gratefully accept a donation or scan from anyone having additional pictures of A&W Root Beer or any other historic photos of local landmarks. Please call us at 767-7299 if you can help. 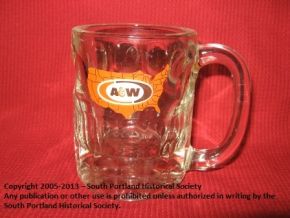 Being the youngest of five children, I witnessed my mother make many a birthday cake and that was the way it was done back then to save money.  There were those occasional trips to Uncle Andy’s Bakery to pick up a cake if it was a really special occasion or if mom just couldn’t fit it in her to whip one up herself.

Uncle Andy’s Bakery at171 Ocean Street was a place you would always be greeted by a smiling face behind the counter and even when there were a lot of people waiting I don’t remember waiting long.  Perhaps time passed quickly as I stared through the glass at all the tasty looking goodies.

I instantly recognized one of those smiling faces we were greeted by.  I found her sitting quietly eating a bagel with her husband at a local spot not far from the former location of Uncle Andy’s Bakery.  Lenore Bean, or “Lea” as she prefers to be called, still has that engaging smile which many past customers I’ve talked to also commented as they reflected on the good old days.

Lea told me she especially loved the little children that came in with their mothers and would hand them a cookie or two.  I remember that I would grimace slightly at the offer of a cookie and she would understand that I’d rather have a donut!

Lea told me that Uncle Andy’s had the best pastries and donuts and that they served “real Danish” much better than the kind you find these days!  Mr. Palanza, she says, learned how to make Danish over in Europe during the war and brought home the recipe with him.  She remembers opening the bakery in the morning and working six and a half days each week there.  It was a labor of love for her.  Lea is also known for her smile and friendly demeanor at the Cookie Jar on Shore Road where she worked after Uncle Andy’s closed.

Uncle Andy’s Bakery was started by Fred Nanney in the late 1940s and purchased in 1951 by John Palanza whose name became synonymous with that well-known institution that lasted for half a century.  A glimpse of the former bakery can still be discovered at Uncle Andy’s Coffee Shop where old photos hang on the wall including one of the 750 pound cake shaped like a lobster.  It is said that the red frosting weighed 150 pounds.  I’m getting a stomach ache just thinking about it.

Lea and her husband Herb recently celebrated their 70th anniversary surrounded by their children and grandchildren.  If by chance you happen to stop by the nearby bagel shop on a Tuesday morning, I’m sure you will instantly recognize Lea as she gives you one of her unmistakable smiles. 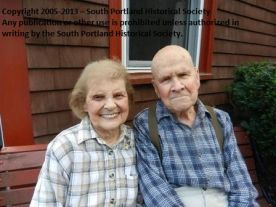 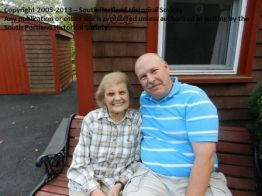 Eddie Mardigan was a tall imposing gentleman, a man I really looked up to, at least when I was five years old.  I remember him behind the counter in that store at the bottom of Meeting House Hill.  My mother would fill her shopping cart with various grocery items as I followed her wheeling through the checkered aisles of the “Hillside Red & White.”  Among the many businesses that occupied that location, it is perhaps better known for “The House of Weddings” and is now the home of the frequented “Cherished Possessions.”

The most fascinating thing I remember at the Red & White at 185 Cottage Road is the conveyor belt at the checkout counter.  It probably wasn’t the first of its kind in the greater Portland area yet something in my memory always takes me back to that check out at the Red & White.

There was only one checkout counter at the market, that I remember, and the belt we loaded the groceries on couldn’t have been any longer than four or five feet in length.  It was magic I tell you.  Mr. Mardigan would flip a switch and the groceries were dragged away from us to where he would punch buttons on a big old cash register and then whisk away the stuff towards the bagger.

The gumball machine was the next best thing there and I would beg for a penny to plunk into the machine just to see the gum slide out.  That’s not entirely true since I loved to chew gum.  It must have been some other kid I saw shaking the gum machine in hopes of getting three chicklet pieces because I remember looking over my shoulder to make sure Mr. Mardigan was busy with the next customer before I grabbed the big glass ball to tousle it once or twice in hopes of getting a third piece.

George Stanley started the original Hillside Market in the late ‘30s and sold out to Sooren Mardigan in the 1940s.  Sooren operated the store as the Hillside Red & White Market into the 1960s until his death in 1962.  Eddie took over the business upon his father’s death and the business continued into the mid-1970s when smaller markets lost out to local larger supermarkets.

Although this was not the only “Red & White Market in town, I don’t have such vivid memories at the one more commonly known as the Cape Red & White other than the inside of each store was very much alike.  That market was further up Cottage Road just beyond the Portland Players theater.  The folks who now dine there at Pom’s Thai Restaurant may not be aware of the grocery store that occupied the building from the 1940s until 1970.  The Cape Red & White, like the Hillside Red & White, could not compete with the new “super” stores. 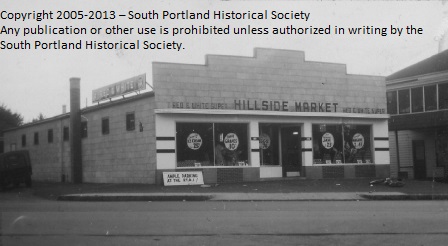