We continue this week with more of the World War II shipyard housing complexes in South Portland. Redbank Village and the Westbrook Street Trailer Park were located adjacent to one another along the section of Westbrook Street that led toward the airport. The accompanying photographs and text come from the 1953 tenth anniversary program of the South Portland Housing Authority:

“Redbank Village is a permanent project of frame one and two story, two and four family dwellings. There are 238 dwelling buildings containing 500 one, two and three bedroom units. The first units were ready for occupancy on January 12, 1943. Except for a few months at the end of the war, it has remained fully occupied and now has a waiting list of applicants. There are 191 acres of land, less than one-half occupied by the present buildings and recreation areas. The Community Building contains 14,364 square feet of floor space for offices, maintenance shop and stockroom, garages, assembly hall (capacity 300), three meeting rooms, kitchen, clinic and storerooms. In the center area at the rear of the Community Building is a 14 room grammar school, playground, skating rink and athletic field.”

In the accompanying aerial photograph, we can see the Redbank development with its semi-circular street pattern. The area that was the Westbrook Street Trailer Park is in the center, just below Redbank, with the three straight streets. According to the Housing Authority Program, “the gray space across center and right-hand streets shows where an airplane crash wiped out about twelve trailers.” The airplane crash they refer to occurred on July 11, 1944, and is considered the worst airplane disaster in Maine’s history. Our thanks to South Portland resident John Kierstead for his work in having a permanent monument erected to recognize the disaster and to remember all of those who lost their lives that day. The monument is located behind Plaza 29, on the land where Macarthur Street intersects with Westbrook Street.

The Housing Authority program mentions both the Westbrook Street Trailer Park and the Mitchell Road Trailer Park together: “These two trailer projects consisted of 300 expansible trailers for family use and additional trailers for toilets and laundries. They occupied a total of 38 acres. Expansible trailers are so constructed that their sides open out to provide two rooms, one on each side of a central utility section containing an oil fired circulating heater and a kitchen equipped with cupboard space, a gasoline stove and ice box. Sleeping accommodations provided for six persons. Utility trailers were equipped with tubs and showers and Bendix electric washing machines.” 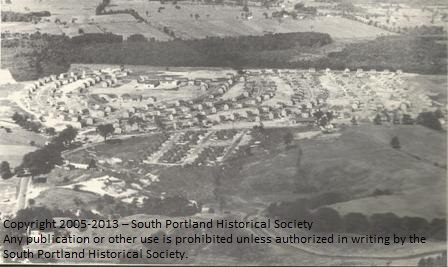 We have been examining all of the World War II shipyard housing complexes in South Portland, as pictured and described in the 1953 tenth anniversary program of the South Portland Housing Authority.  This week, we look at the last of the wartime projects, Cushing Village.  This large housing project was located at the easternmost end of Broadway and consisted of 60 buildings.  Most of the land is now owned by Portland Pipe Line Corporation; they have left the site as just a large open field on your left as you approach the end of Broadway. The Housing Authority program provides the following description of Cushing Village:

“On eight and one half acres of land, these sixty buildings provided eight hundred eighty-three dormitory rooms for single war workers. Each building of from eleven to twenty-one rooms contained large central bathrooms, laundries, reception rooms and heater rooms. Other similar buildings provided for the office and maintenance shop, a fully equipped cafeteria and a recreation building.

“Cushing’s Village opened in March of 1943 and continued active and well occupied until June of 1945. It served a much needed use and was attractive in its appearance with the asbestos shingled buildings and some landscaping.”

Gathering chestnuts from the sidewalk in front of the Sparhawk Mill came to mind when I asked my cousin Frankie Marston what he remembered about his dad working there.  That was in the 1950s, he says.  Frankie’s sister Marlene tells me she remembers hoses crisscrossing the floor around the machinery and a very strong smell of chemicals when she visited her dad one day.  She was 10 years old and says she also recalls gathering shiny chestnuts out front.

Uncle Frank worked there from 1946 until 1958 when he left to take a permanent position as a letter carrier at the post office.  Marlene recalls her parents struggling with the prospect of Uncle Frank leaving Sparhawk Mill for a job at the Post Office.  As she recalls, the pay was much better at the mill.  Uncle Frank did leave the mill and over the years I came to know he was well known in South Portland as the cheerful letter carrier who would often share a joke or funny story.

The rug pictured here was made for my folks by Uncle Frank and I fondly remember it holding a place of prominence at our front door growing up.  That carpet now proudly adorns my front entry.

The mill which manufactured rugs here as well as in Yarmouth consolidated its operations to the Yarmouth Sparhawk Mill.  The city directory indicates that Percival’s Warehouse then operated from the former Sparhawk Mill building on Cottage Road, until the building was torn down in 1965 to make way for Martin’s Food Market.

If you have any information about Percival’s Warehouse or would like to share a fond memory or historic photo for a possible future article about a place of interest in South Portland, please email me at craigskelton@yahoo.com or call me at 207-799-8589. 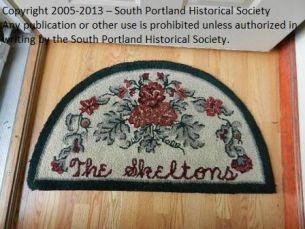 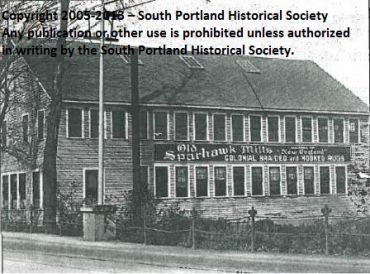