As the holidays were approaching, I knew it was time to dust off the yellowed and scarred recipe card handed down to me by my parents and fill the house with an old familiar smell of Skel-Yums roasting in the oven.  I doubt many readers will remember that Skel-Yums were sold locally in stores such as Martin’s, which is now Hannaford’s in Mill Creek, and a few other mom and pop establishments.

It is also the season for me to dust off “It’s a Wonderful Life.”  One of my favorite lines in the movie was when George Bailey comments on how his dad could save “two cents on a length of pipe.”  My dad was like that and, being a season for reflection, I can’t help but remember how hard my parents worked to raise five kids and keep us fed and clothed.  One of those things he did to make ends meet was a sort of snack business where he took a big box of goodies to work each night and at break time would flip open the flaps and sell snacks to make a few extra dollars.

Dad’s sister, our Aunt Ludy had a favorite homemade snack recipe called Scrabble which she would roast for holidays and family gatherings.  Both my mom and dad had lived in foster homes as teenagers and as families go, I can’t remember a holiday, whether real or contrived that she didn’t bring us kids together with our many aunts and uncles.  For Mom, there was an overwhelming need to bring family together and I chalk that up to her having been separated from her family during many of her childhood years.

Mom and Dad played around with Aunt Ludy’s recipe and soon started making a snack mix of their own.  My parents continued to make the stuff for family gatherings and now it just wouldn’t be right without having some Skel-Yums to munch on.  They even became a favored Christmas gift from mom and dad and in our home peanut and coffee cans or anything resembling them were saved throughout the year and then wrapped with Christmas paper and topped with a bow before they were filled with Skel-Yums.  We even saw a growing number of friends and relatives that would save cans for us or return empty cans they had received the yummy snack in the prior Christmas in hopes of refills!

Some folks suspected we added some addictive ingredient to the snack because they always wanted more once they got a taste.  Many commented they tried recipes found on cereal boxes yet could not duplicate the taste of Skel-Yums and wanted our secret recipe.  Dad started including Skel-Yums with his snacks at work and so many folks raved about them that he approached John Martin and a few other small store owners about putting the treat on store shelves.  My brother Ken recalls that Mom and Dad got phone calls from strangers who had bought Skel-Yums at one of the stores and wanted large quantities for a home party.  One order he recalled was for five gallons of the stuff.

Baking the snack was a slow process and in our home was just another form of torture while the smell of garlic and other spices filled the house.  There was a ritual that involved stirring the mix every 20 minutes or so and moving the pan on the bottom shelf to the top one to ensure more even baking.  My mom and dad would switch off this duty when called to do so by a ringing egg timer on the stove.  Being in the right place at the right time would often result in scoring a small sample of hot Skel-Yums while the oven door was open.

Perhaps my brothers and sisters have memories of waffles for breakfast in our home but I don’t, even though I have a very vivid memory of my parents’ waffle iron.  It had a bake-a-lite handle that dangled off the front and the electric cord covered with what looked like woven thread.  Dad used the waffle iron to seal the packages of Skel-Yums.  We had a production line of sorts on the Formica kitchen table.  The warm and irresistible Skel-Yums were sitting in two pans that doubled as a turkey roasting pan at Thanksgiving.  A small Tupperware juice cup served as the measuring tool used to scoop just the right amount of product into cellophane bags.  As one of Dad’s little helpers, I took my turn pouring the mix into bags, and then set them in rows on the table leaning them up against the baking pans.  Dad then would squeeze closed the top of a bag, lift open the waffle iron and crimp top inch or so of the bag.  Each sealed bag was set aside until the entire batch was done and we would then fold a label in half over the sealed portion and staple it in place.

It is funny to talk to people about eating Skel-Yums because so many people have said things like “I eat only the Chex and others eat only the Cheerios.  Still other folks have commented on picking through to get only certain nuts in the mix.  My sister Jean remembers trying to see how many Cheerios she could squeeze onto a pretzel.

Jack Collet, who was one of my buddies in school, enjoyed the Skel-Yums I would bring to school during the holidays and got a taste of the family snack at my birthday party or during other visits to our home.  He started calling me Yumpseed which I remember being shouted across the Roosevelt school grounds during a kick ball game or some other event.

Skel-Yums are still found at family gatherings and get-togethers, however I don’t think any of us kids have been able to exactly duplicate the taste I remember growing up. 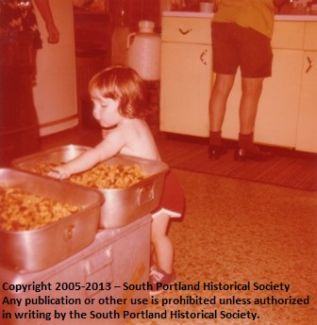