For those of you who followed the recent closure of the short end of Gorham Road to make way for construction of the Buffalo Wild Wings restaurant, the sale and development of a city street is not all that unusual.  Such was the case back in 1978 when Frank Adam, owner of the Howard Johnson’s Restaurant and 40-room Royal Motor Inn directly behind it, petitioned the City to vacate a portion of Westbrook Street that bordered the inn.

In the 1970s, Mr. Adam was working on acquisition of the homes behind the motor inn and after demolishing them, expanded the Royal Motor Inn from 40 to a total of 121 rooms and operated it as the Howard Johnson Hotel.  The building expansion crossed the former Westbrook Street connecting the original building to an indoor pool wing and 4-story hotel still in operation.

A New Hampshire company purchased the 121-room Howard Johnson Hotel in June of 1998 from Frank Adam’s company called Royal Motor Inn, Inc.  Before Mr. Adam died in February of 2003 he was honored as one of the first inductees to the Howard Johnson Hall of Fame. 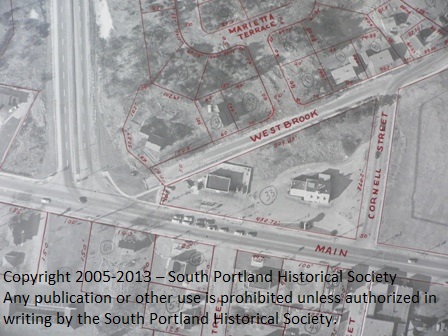 The first peoples inhabiting the land now known as South Portland were the People of the Dawnland, the Abenaki, and now more collectively known as the Wabanaki. In honor of this heritage and her parents, Guy Stanwood and Ruth Ellen McLellan, Susan McLellan Plaisted will present “Foods of the Dawnland: A Presentation of the Foodways of the Wabanaki”. This outdoor historic cooking demonstration will take place on Sunday, August 11, from 1 pm to 4 pm at the South Portland Historical Society’s museum located at Bug Light Park in South Portland.

At this special afternoon event, Ms. Plaisted will demonstrate the cooking methods and types of foods that were used by the Wabanaki.  Please come and visit at any time between 1pm and 4pm, as this will be an on-going demonstration.  The event is free and open to the public. To reach the museum, take Broadway east to the ocean, turn left onto Breakwater Drive, then right on Madison Street that leads right into the park. For GPS users, enter 1 Madison Street to obtain nearest directions. For more information, call 767-7299 or visit the South Portland Historical Society on Facebook.

Susan McLellan Plaisted is the proprietress of Heart to Hearth Cookery, a food history business based in Bucks County, Pennsylvania.  She offers demonstrations of 17th century through 19th century Colonial American and European cooking methods, practices, and recipes, as well as pre-European-contact and post-European-contact Native American foodways. Her repertoire ranges from open pit, through down hearth, raised hearth, and cookstove cooking. 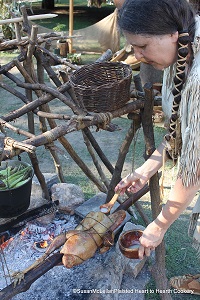 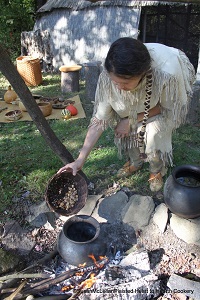 I remind folks to look up, especially when walking along a sidewalk surrounded by old buildings.  You can miss a lot when not looking up.  Such may not be the case if you have attended a student function at the Mahoney Middle School auditorium.  Larger than life is the image of the Mahoney Raider adorning the wall high above the stage, so large in fact that you won’t have to look up to notice it.

At my daughter’s last choral concert, I pondered the origin of the larger than life mascot looming above for all to see. My sister Jean tells me that her class in 1968 embarked on a search for a mascot.  Ron Adams, a guidance counselor at Mahoney recalls that Memorial Junior High had been completed the year before, thus creating the two junior high school system vs. the old single South Portland Junior High School. It was at that time that the idea of needing a school mascot was hatched.  Selection of a mascot was left up to the student body.  A very talented member of the class named Karen Walker, daughter of long time guidance secretary Mary Walker, drew the artwork that was selected as the winning logo you see here. 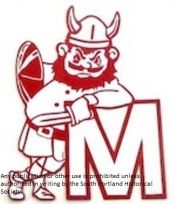 Anyone who knows me could say that I’ve probably eaten way too much popcorn over the years.  The smell of popcorn drives me absolutely crazy.  That smell evokes a fond memory of a place better known for potato chips than popcorn; however I can’t get the childhood image out of my mind of my visit to the Circus Time Potato Chip building in South Portland.

I was one of five children and back in the day, my dad supplemented the family income any way he could.  He had a sort of honor snack business before I remember there being anything like that.  One afternoon, he took me along on his snack buying errands and one of those stops was on Circus Time Road.  As we walked into the building, the image I remember was that the popcorn popper reminded me more of a cement mixer popping corn as it spun.  There is nothing like fresh samples!  The bagging equipment was clacking along and churning out bags as my dad was loading a big box with packages of popcorn and potato chips.

George Robinson who previously co-owned Humpty Dumpty Potato Chips with Norman Cole which was started in the early 1940s left to start Circus Time Potato Chips with his wife after a decade or so in that business.  The Robinsons were in their 50s at the time.  The company first began in Portland on Anderson Street and the growing business moved to a building they built in a newly established business park near the mall in South Portland.  The Robinsons operated the business until they retired in the 1970s.

The Foden Road name was extended across Western Avenue during a National Semiconductor expansion project. The potato chip maker is now perhaps long forgotten and the Circus Time Road name has been lost, however I fondly remember its placement in history, especially when I smell fresh popcorn. 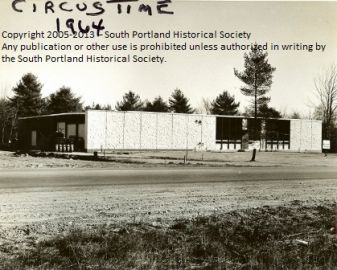 I am often asked if I’m related to the person whose name appears on the street sign in Highland Memorial Cemetery.  I find it quite an honor to drive down Ken Skelton Lane to visit the grave site of my parents, grandparents and other relatives buried there.  Visits to the cemetery were not always that pleasant.  As a small boy, I remember loading up the lawn mower and a set of steel clippers and making the trek to the cemetery to mow the grave site ourselves.  Somewhere in the history of the cemetery, the perpetual care money had been stolen and the records were never recovered.  My dad could not bear the thought of his parents’ graves left uncared for and so we made frequent visits there to do it.

In 2004, the Highland Memorial Cemetery board bestowed the honor of a street name on my dad because his efforts didn’t stop at simply caring for his parents’ graves.  The recognition was for countless hours and many, many years of volunteer efforts to restore Highland Cemetery and its burial records.  Dad was not alone in those efforts and when I couldn’t reach him I knew he was either at Charles Chase Company, who donated office space for cemetery records, or at the cemetery itself.  He spent hours upon hours with May Rowe, who was another tireless volunteer, working on re-creating the burial records that had been long lost.  Dad and a legion of volunteers, led by Art Smith of the South Portland Lions Club, were also at the cemetery working to bring it back.  One major effort was being there on Memorial Day, year after year, talking with visitors, paying their respects, in an effort to get answers to questions that helped in re-creation of burial records.

I became involved in the process of computerizing the records that dad and May Rowe meticulously transcribed.  Through guidance and funding provided by the Lions Club, the cemetery and its records were revived and that effort set an example for other cemetery projects throughout the community.

Brown’s Hill Cemetery records had also been lost and, in 1999, Sharon Ward with the help of her daughter cataloged the names and dates on all the stones and she drafted a map of that information for reference.  I later discovered a more detailed map done by the WPA (Work Progress Administration) of Brown’s Hill Cemetery and this past spring cross-referenced the information Sharon Ward had created with the lot numbers and sections shown on the WPA map.

During my many years of service at the City of South Portland, I was aware people from around the country had been calling City Hall in search of area cemetery burial records in their efforts to find a relative, or for conducting genealogical research.  John Switzer, a City Parks Department supervisor, approached then-City Manager Jeff Jordan about posting Highland Cemetery information on the City website.  Around that time, I was asked by Sally Hinckley to assist with computerization of the records for Bay View Cemetery and further efforts by Kathy DiPhilippo, the Director of the South Portland Historical Society, contributed records for several other cemeteries within South Portland.  All these efforts have made the records for seven South Portland cemeteries available online at https://ec2-54-218-163-12.us-west-2.compute.amazonaws.com/.

There is always something we can do to help maintain cemeteries here in South Portland and if you are willing to join those efforts that may include raking, brush removal or mowing, please contact the South Portland Historical Society at 767-7299 or sphistoricalsociety@maine.rr.com.