The South Portland City Council is seeking comment from property owners directly abutting so-called “Paper Streets” in the City about their interests in or concerns about these “Paper Streets.”  The City has developed a web application (app) to collect and record public input.  The web based app is at:  http://southportland.maps.arcgis.com.

As you may be aware, “Paper Street” is the term used for those streets or ways that are shown on recorded subdivision plats and plans but that were never built or accepted by the City as public ways.  In September of 1997, the City Council acted to extend, for a period of 20 years, the right to accept those paper streets shown on a list recorded at the Cumberland County Registry of Deeds in Book 13335, Page 89 as public ways.  A copy of this list is available on the City’s website (and the listed Paper Streets are incorporated into the app).  The City extended the public’s rights of “incipient dedication” to accept those paper streets shown on that list until September 29, 2017.  The City does not own the paper streets shown on the list, and they are not City property.  The only right the City has in a paper street shown on the list is the right (but not the obligation) of the City Council to accept it as a public street at a later date. 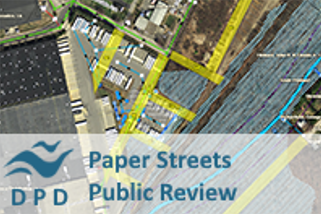 The data collected from this process will help the City Council decide whether to extend the right of “incipient dedication” to accept those paper streets shown on that list for another 20 years. The public comment period will continue until July 21, after which the Planning staff will report the findings to the City Council at a workshop to be scheduled in August.

Further information is available by contacting the Planning Office, telephone 207-767-7603, or by reaching out to the Planning Director, Milan Nevajda at mnevajda@southportland.org.